For only the second time in its history, the World Equestrian Games (WEG) was staged in North America last year. WEG is one of the largest sporting events worldwide. To bring together 723 athletes and their horses from 68 countries, along with the stewards, grooms, trainers, coaches, farriers, chefs d’equipe (team managers), veterinarians and other personnel that travel with them, and family members, more than 1,000 news media representatives, and spectators from around the world is no small feat for a venue or city of any size.

For the relatively new Tryon International Equestrian Center (TIEC), tiny Tryon (population less than 2,000), and Polk County, with only 20,000 citizens, it presented a logistical juggernaut that required pulling in a host of different agencies and organizations from across the region and the state, and the Federation Equestre Internationale (FEI), the governing body of the Games, to help make it happen. Only the second city to host the games outside of Europe, (Lexington, Kentucky hosted the games in 2010) the locale stands in stark contrast to cosmopolitan European cities such as Stockholm, Sweden; The Hague, Netherlands; Rome, Italy; Jerez, Spain; Aachen, Germany; or Normandy, France.

Airlifting horses from six continents. Transporting and caring for the horses alone hints at the significance of the competition. “This is the largest commercial airlift of horses in history, with only wartime shipments of horses coming close, so the military precision involved in the logistics is incredible,” FEI President Ingmar De Vos says. “The horses are finely tuned equine athletes and are not only very valuable, but they must arrive in peak competition condition, just like their human counterparts.” 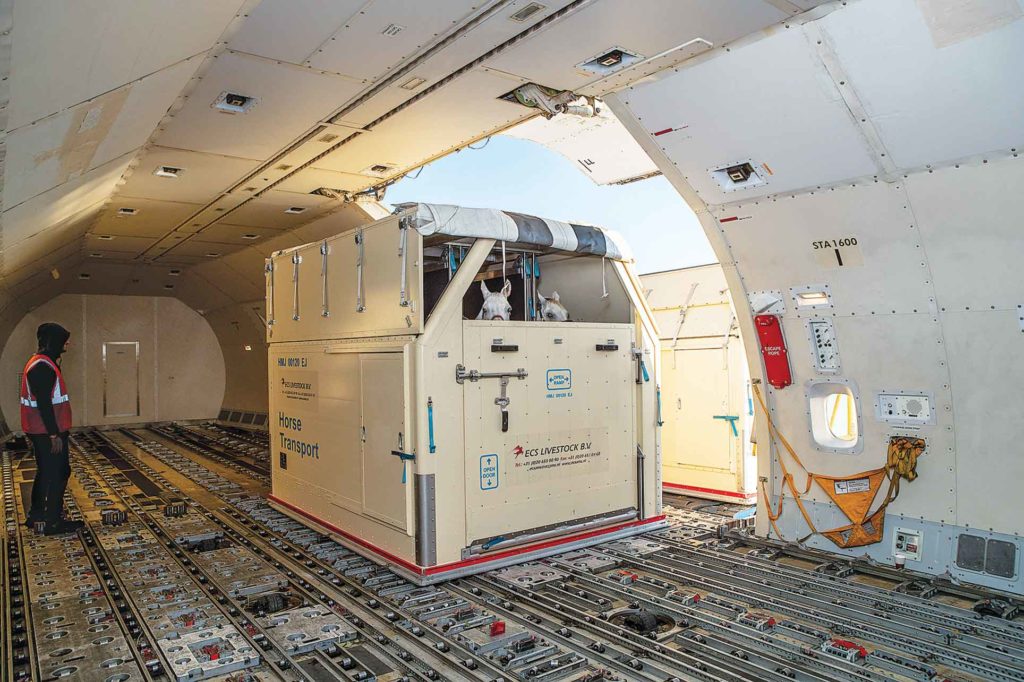 Along with the horses, tons of equipment ranging from saddles, bridles, rugs and grooming kits, wheelbarrows and pitch forks, to horse shoes and all-terrain studs along with feed, in-flight snacks and 20 liters of water per horse were included.
All equipment had to be brand new due to biosecurity concerns and to avoid any diseases being transferred. Grooms and veterinarians accompanied the horses to ensure their safety and to care for them during the flight.

Security for horses and humans. While security was certainly top of mind when considering competitors and spectators – the FBI, Homeland Security, TSA, State Highway Patrol, local sheriff’s office and others were involved – the
biosecurity measures give a fascinating glimpse into the complexity of protecting animals.

Horses entering the United States were moved into quarantine for at least three days and up to 60, depending on the country of origin.

A subset of the quarantine requirements demanded extra measures for horses that tested positive for piroplasmosis, a tick-borne disease that is quite common in horses from Europe. “A lot of horses have it but it’s benign. They are perfectly healthy, but they are carriers,” explained Michael Stone, the president of the Games organizing committee. “The U.S. is technically free of piroplasmosis so for the games the U.S. Department of Agriculture gave us a waiver provided we kept these horses under strict conditions.”

Though the facility has 1,300 stables, it had to set up two large tents to house the 84 horses that were carriers of the disease. The tents then had to be shrink-wrapped with a special material to seal them so no pests or insects could get in
or out. Each tent had to have two entrances and foot baths placed at the entrances.

“We had to do a huge amount of prevention to stop the potential of the disease getting into the U.S. That meant for the duration of the games the horses had to be sprayed down every day. They had to be checked for ticks every day. They had to be kept in a climate-controlled environment. Even the manure had to be kept separate for disposal. Large cardboard boxes, each holding a giant bin liner, had to be put together to hold the manure. When they were full, the liners were sealed, and then the cardboard boxes had to be sealed and placed on special transport to be taken to an incinerator. It was massive,” Stone said of the entire operation. 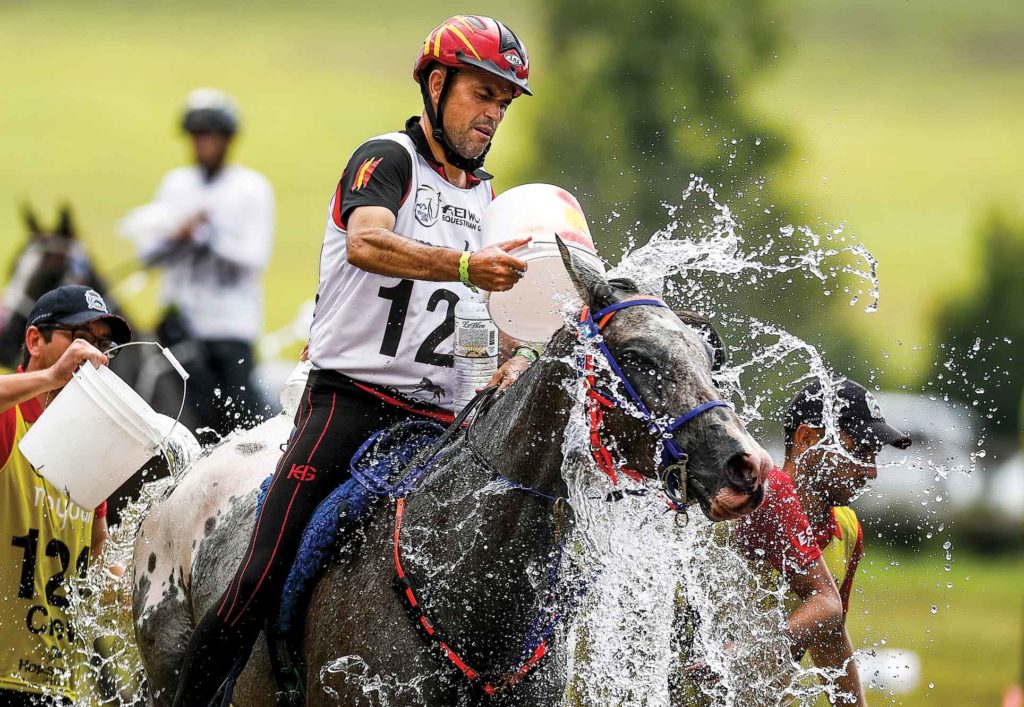 Jaume Punti Dachs of Spain cools down Echo during Endurance race, which ultimately was cancelled due to extreme heat. Photo courtesy FEI/Martin Dokoupil.

A third large tent was set up for animals under normal quarantine where about 50 horses at a time were rotated through it until they could move to the regular stables.

Pampered horses. The tiniest detail is considered when caring for these high-dollar equine athletes. Owners of each horse or team of horses stipulated the type of bedding their horses preferred. Most used wood shavings. Some used straw. And horses with allergies required shredded paper. Stone says most materials were sourced locally or from Georgia.

“Yes, horses have allergies,” he says. “They are pretty much like us. They also have different dietary requirements.”

Most large federations shipped large containers of feed for their horses; some even flew in the feed from various feed-manufacturing partners that are familiar with equine nutrition. Some used the feed provided by the facility that was sourced with proven diets in mind. The facility had to arrange storage for the feed, most of which had to be stored in refrigerated trucks to keep it from ruining due to the heat and humidity. Some federations brought or requested hay steamers “to ensure the same clean, irritant-free hay that the elite equine athletes thrive on at home.” It’s all about peak performance and the details matter.

Just as people are often sensitive to the different tastes and smells of water, so, too, are horses. “It happens all over the world when they fly long distances to different places, the water tastes slightly different and the horses won’t drink,” says Stone. “We put apple juice in the water to help get them started drinking.”

Veterinarian convergence. In addition to the intense logistical planning, veterinarians and medical doctors had to consider the extreme heat and humidity of September in North Carolina and its potential effect on both horses and riders. “Heat exhaustion and heat stroke are taken from human medicine and also relate to horses. If you have seen a horse with heat stroke it’s not something you will forget and will certainly recognize again,” said Dr. Martha Misheff, member of the FEI Veterinary Committee as she spoke on a panel to help raise awareness and give guidelines for preparing for the competition.

Nearly 800 veterinarians were on-site as part of competing federations, to check horses before, during and after competitions, and to oversee USDA quarantine requirements. Vets had their hands full when hot and humid weather plagued the entire event, some of it attributed to Hurricane Florence that made landfall 325 miles away just as the Games were getting under way. They had to recommend the cancellation of the endurance race when a large number of horses displayed clinical signs of metabolic issues. While the equine athletes are performance machines, it’s up to the vets and others to follow the protocols in place to ensure their safety.