Nobody wants to be told to eat their vegetables, but you should eat Brussels sprouts. Yes, honestly, you really should. In fact, if you are adventurous and have a little extra space on your homestead, you might consider growing a few. Most commercial production is in California, but Brussels sprouts can be grown across a wide swath of the nation, and they really work well in areas that get some cold weather in the autumn months.

“Brussels sprouts become ridiculously better after they have received a frost,” says Andrew Dunham, a fifth-generation farmer from central Iowa. He and his wife, Melissa, grow 20 acres of organic vegetables on their Grinnell Heritage Farm. That includes about an acre of Brussels sprouts.

“One advantage that the Midwest has over California is the fact that it gets cold,” Dunham continues. “The flavor is so much better on the sprouts we raise here that it almost blows your mind. To be honest, if a sprout hasn’t been frosted, I don’t want to eat it. You can call me a Brussels sprout snob.”

Sprout snob? This is uncharted territory for a vegetable that was introduced into the U.S. by French settlers in Louisiana in the early 1800s. Brussels sprouts (the French call them choux de Bruxelles, which means Brussels cabbage) then spent the next couple of centuries in the U.S. in relative obscurity—or worse, as the butt of jokes.

A national survey in 2008 named Brussels sprouts the “most hated vegetable in America,” with respondents describing them as “putrid,” “smelly,” and “vile.” Over the past ten years, however, cosmic forces have aligned to muscle the Brussels sprout into today’s culinary darling, the coolest cole crop.

Sprout superfood. Brussels sprouts have long been recognized for their nutritional value. In the 18th century, British explorer James Cook took Brussels sprouts on his Pacific voyages in order to fend off scurvy, as these “miniature cabbages” are a more concentrated source of Vitamin C than oranges. Researchers today are finding that glucosinolates—the sulfur-containing molecules that are the source of the pungent odor when Brussels sprouts are improperly stored or cooked—play an important role in human health. Glucosinolates break down into products that may help protect against cancers of the lung or of the gastrointestinal tract. 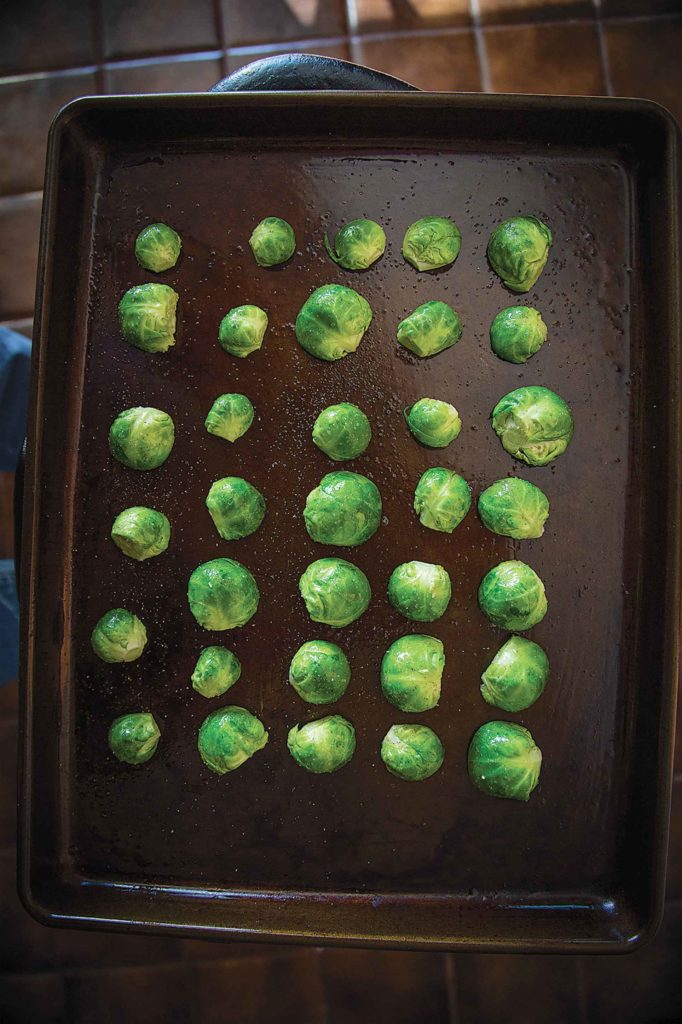 But the real popularity boost traces back to taste. Breeders have worked on new varieties that tame some of the strong flavor associated with the brassica family. And chefs are pairing Brussels sprouts with an amazing array of foods; a recent web search turns up more than three dozen pairings, ranging from apples to water chestnuts. Of course, there is one pairing that stands out above all others: bacon.

That’s no surprise to Iowa grower Dunham. “If you are asking me to tell you, in a nutshell, why Brussels sprouts are so popular today, I would say the answer is bacon,” he observes. “The restaurant scene has really pushed the popularity of Brussels sprouts. They prepare sprouts with bacon, and the result is a sure-fire appetizer.”

Raising Brussels sprouts, however, is not such a sure-fire proposition. The Dunham family began farming the family land in 2007, obtaining organic certification in 2009, and now serves more than 250 families with Community Supported Agriculture (CSA) produce during the growing season. However, even with this level of expertise, Andrew admits that he went through a learning curve to make Brussels sprouts into a commercial success on the farm.

“Brussels sprouts are really nice to have in our CSA during the fall months,” he says. “But they require a long growing season. We made the mistake of starting them too late. So, in our climate, we’ve learned to treat it more like a spring crop.” The Dunham family starts seeds in a greenhouse, then transplants to the field in mid-May.

Commitment to sprouts. In Chester County, Pennsylvania, Emma Cunniff raises Brussels sprouts (along with more than 100 other varieties of produce) at her Kneehigh Farm, and she agrees that Brussels sprouts can be a challenge. “Sprouts are a commitment,” she says. They are susceptible to pests, such as the cabbageworm; they are heavy feeders; the plants are large, requiring a wide berth in the garden to provide room to grow.

Like all cole crops, the sprout crop requires irrigation if rainfall fails to provide an inch of precipitation a week. Kneehigh Farm, which is a vegetable farm operated exclusively by women, uses drip irrigation to efficiently provide the moisture. 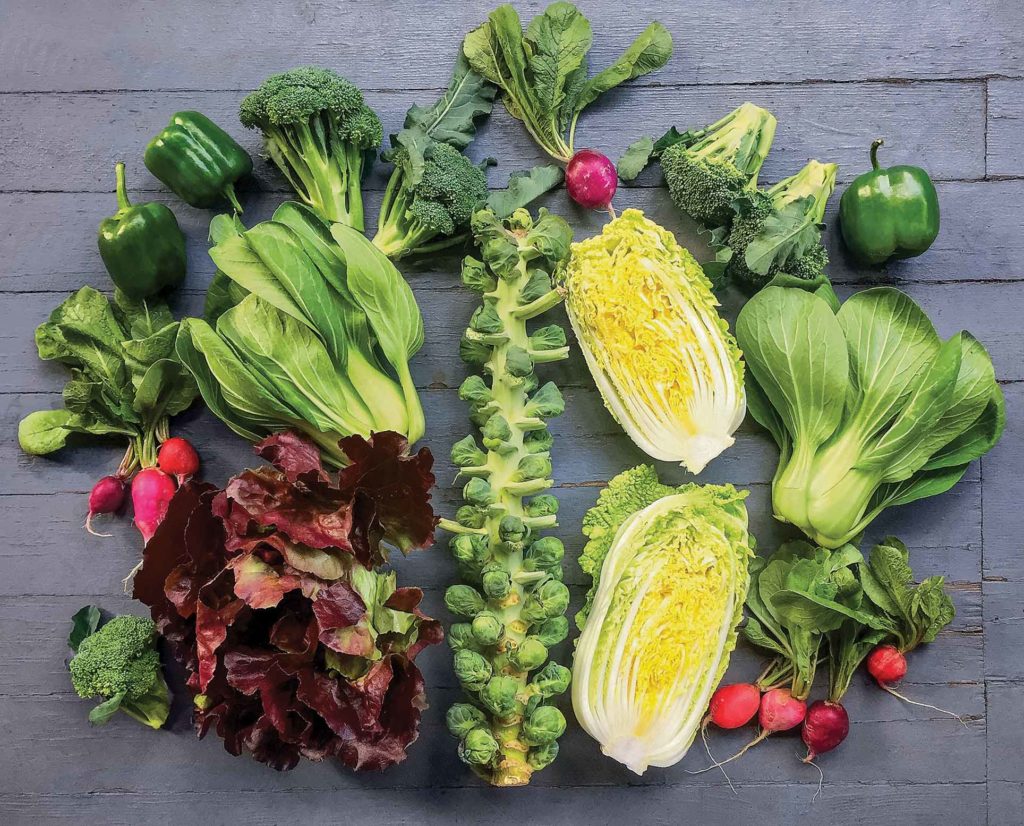 A stalk of Brussels sprouts highlights a colorful and healthy array of vegetables included in a CSA offering grown at Kneehigh Farm in Chester County, Pennsylvania.

Topping and timing. Timing also becomes an issue. Maturity of Brussels sprouts varieties typically ranges from 90 days to more than 120 days. Like many growers, Cunniff “tops,” or breaks off the growing point, of the stalk that supports the developing buds. Brussels sprouts actually are buds, not sprouts, and topping the plant allows the buds to develop uniformly. Planting dates and topping dates have to be carefully planned so that Brussels sprouts are ready for market at the right time.

Those sprouts are a fall favorite for Kneehigh Farm customers, which include more than 60 families receiving CSA produce as well as a couple of restaurants in the Philadelphia area. “People love them,” Cunniff says. “We often get questions about when the Brussels sprouts are coming in.”

She tries to time the crop so that it can make the Thanksgiving meal, where Brussels sprouts have earned a traditional spot on the table. And Cunniff, herself a transplanted California native, agrees that frost improves her Pennsylvania sprouts. “They become super sweet after a frost,” she says.

And that’s the taste that has helped propel Brussels sprouts to their current spot as a coveted vegetable. “If you ask me to rate all the vegetables we grow here at Kneehigh Farm,” Cunniff says, “I’m picking Brussels sprouts as my favorite.”