Inside a metal building on the Boone County Fairgrounds in Missouri, Charley Cary slowly moves among the folding tables full of country hams—200 in all, brown and golden and lined up in neat rows—eyeing each carefully.

As this year’s judge, Cary is at the start of an hours-long process. Eye appeal is just one of the criteria that can give a ham a perfect 100 point score. “I’ve been doing this a long time,” says Cary, “and I’ve never given a ham a perfect score.”

The other characteristics he’s giving points for? Among them are outside color, smoothness of skin, how the ham is trimmed, meatiness, firmness, and the most important, aroma. A ham can earn as much as 35 points for how it smells.

Cary lifts each ham, presses on it with his thumbs to see how it feels, then moves some hams to a select table. For each ham, he takes a small knife, inserts it in a particular place, and brings the knife to his nose. A good ham has—well, a good smell—sweet, rich, aged, and intense.

When he is finished, dozens of the hams have blue ribbons attached. For the best hams out of the 200, he is feeling and smelling, again and again, to make sure of his final decision.

The grand champion prize would go to Gentry Duncan of Centertown, Missouri, a member of the Englewood Hustler’s 4-H Club. The 14-year-old also won the top prize the previous year. 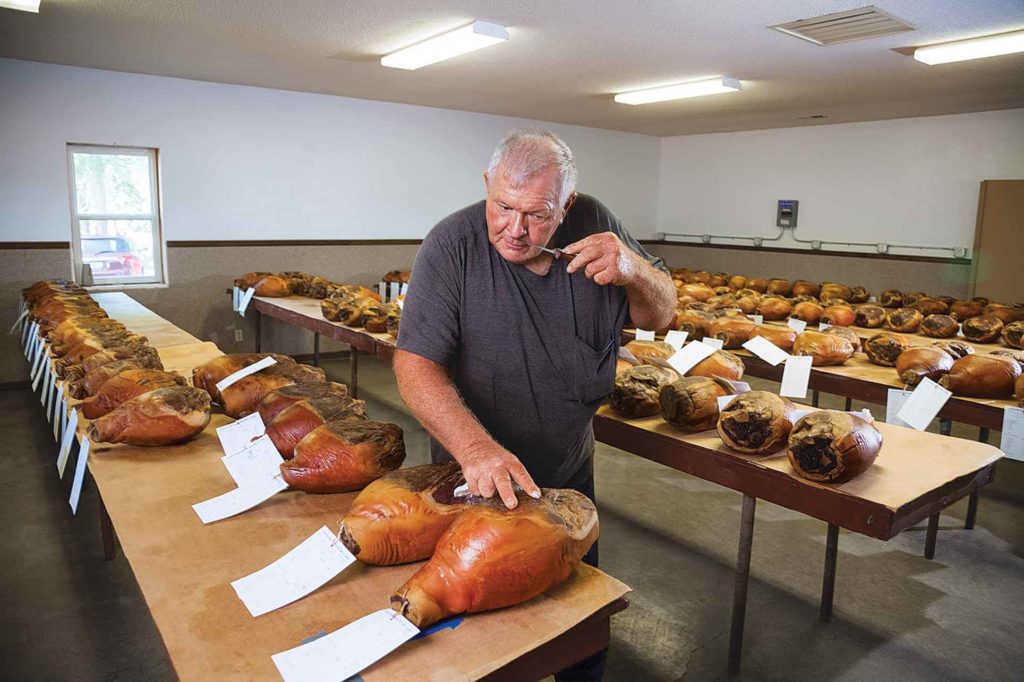 Boone County judge Charley Cary inserts a knife into each ham he judges and smells the aroma. He can give the aroma a score of up to 35 points. Other criteria of the ham can give a potential score of 100, but Cary has never given a score that high.

Learning the craft. Steve Baumgartner certainly does. He learned much of what he knows from Arnold Winkler, a ham curer renowned in Boone County, Missouri. At a young age of 25, Baumgartner offered to help Winkler cure 600 hams—125 a day—and that set the course for Baumgartner. “I always had a thing for country hams,” he says. He learned Winkler’s recipe—salt, brown sugar, pepper—and began curing his own hams. Winkler mixed his cure by the cup, but Baumgartner found that too arduous and converted it to pounds—25 pounds of salt, six pound of brown sugar, one pound of black pepper. Now, 40 years later, he has his own business on a small farm near Rocheport, Missouri (boonecountyham.com). He’s cured as many as 600 hams in a year but has cut back in recent years because of stringent USDA requirements.

He is not alone in facing such regulatory challenges, and that uncovers some quandaries: How can a piece of raw meat hang in a barn for nine months or more, with temperatures of 90-plus degrees when summer arrives, possibly be safe to eat?

“Country hams were born out of a way of preserving food long before refrigeration,” says Dana Hanson, a meat scientist at North Carolina State University. “This country has been consuming such meat since its beginning. It’s what early settlers used to keep meat from one season to the next.”

So, cured meat has a proven record of being safe, USDA or no USDA. But why?

The answer is salt. A ham is cured by rubbing salt thoroughly into the ham’s hock, the thinner area where the hog’s rear begins tapering down to the leg and hoof. The entire ham is covered in a thin layer in salt, then wrapped in paper and enclosed in a cotton sack to hold the salt tightly against the meat, then hung from a roof rafter. There it waits, for months, for the salt to do it’s work. This is all done during the winter, when temperatures are low enough to keep the meat safe even without salt.

During those cool months, the salt begins entering the capillaries of the meat to extract moisture. At the beginning, a “green” ham weighs about 25 pounds. When spring and summer arrive and ambient temperatures reach the 80s and 90s, the salt has extracted 18 to 25 percent of the ham’s moisture. The longer it ages, the more water it loses—and the more flavor it develops.

Any meat can be cured, but Virginia became famous for its country cured hams. “The history of country hams goes back to the 1700s in this country when we were still colonial America, specifically around Jamestown,” says Hanson. “It’s been part of our food heritage.” 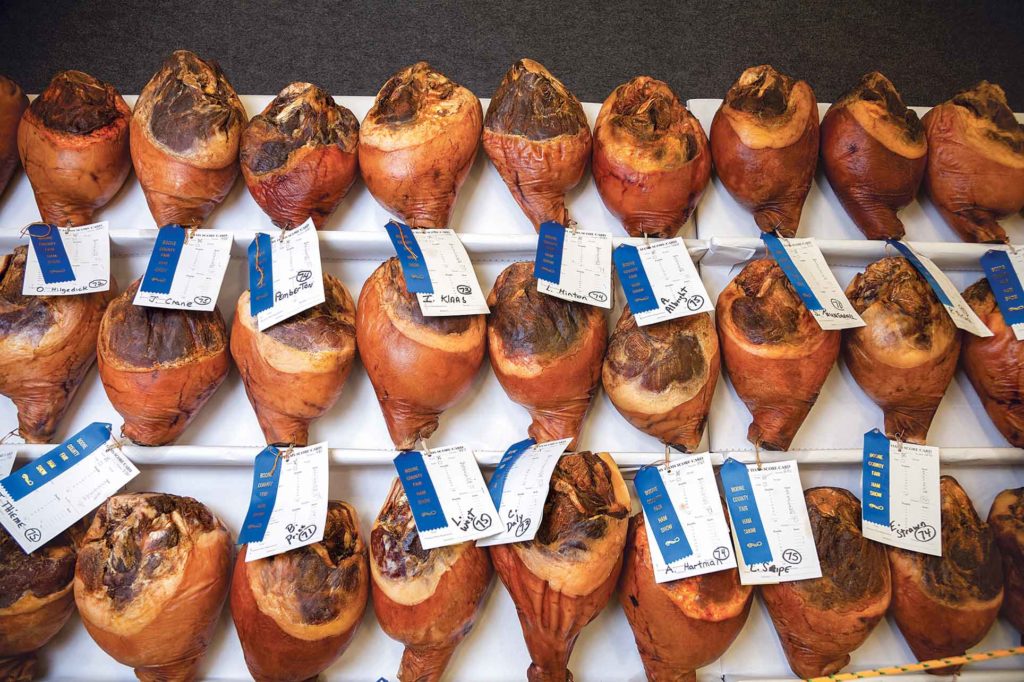 Fine eating was on display at the Boone County Fair in Missouri last year. Dozens of the more than 200 hams entered in the competition earned blue ribbons.

Virginia had something critical for curing—the perfect climate. Boston was too cold—the hams would freeze solid before salt could penetrate the meat. St. Augustine, Florida, was too warm—the hams would spoil before curing. When settlers migrated west and relocated in the same moderate temperature zone—places like North Carolina, Kentucky, Tennessee, and Missouri—they took their curing with them. It’s in these places where, even after the advent of refrigeration and no curing was needed, the country ham tradition lives on.

The debate over whether such meat is safe has gone on for years. Eighteen years ago, A. Estes Reynolds, a meat scientist in Georgia, conducted a test with colleagues and proved that it is. Estes cured groups of hams, some with just salt and others with salt and nitrates. And in some groups, he even inoculated known dangers such as salmonella, E. coli, and other pathogens. At the end of the curing period, he tested the hams and found no evidence of their presence, even in the “infected” hams. The nitrates did nothing to improve the meat’s safety.

“Bacteria need water,” explains Hanson. “So if you take that away, it makes that product safe to consume. In that low water activity state for long period of time, bacteria becomes less of a concern. “

“It’s all a matter of acquired taste,” says Hanson. “Our food culture is different enough in the United States that it’s just not a food product that we have gravitated towards like it has in Europe over the centuries. I think it’s the most beautiful product in the world, but it’s just that our eating trends and culture are different.”

Hanson sees U.S. tastes are changing. At his meat science department in North Carolina, he recently began holding classes for professional chefs, teaching how they can cure their own meats for their restaurants. Go into a nice restaurant in a big city and you might see a charcuterie board as an appetizer—a piece of wood holding a selection of prosciutto, capicola, pancetta, and various sausages. Charcuterie, a French word, means the process of crafting fine cured meats.

Country ham probably won’t be on that charcuterie board. “I like to say country ham is the redneck cousin of prosciutto and serrano,” jokes Hanson. “But they’re very similar products in the basic premise of how they’re made.” 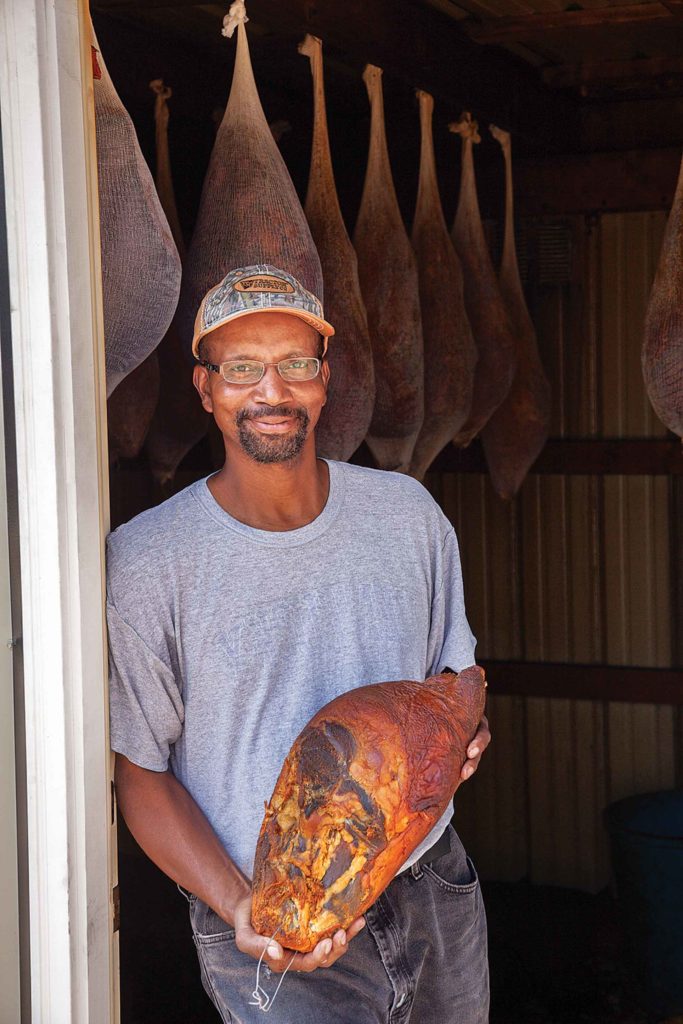 Tony Baker of Trigg County continues the country ham tradition, something he learned from his father in law, Charlie Bell Waddlington.

While food tastes are changing, the craving for cured country hams has never wavered in pockets of the U.S. It’s big in Missouri, but in Kentucky, the passion for cured hams is close to a religion. The tiny town of Cadiz, in Trigg County, Kentucky, holds a country ham festival the second weekend in October that draws 30,000 to 60,000 people, says director of tourism Bill Stevens. “It’s crazy.”

Tony Baker of Trigg County continues the tradition, something he learned from his father in law, Charlie Bell Waddlington. Baker couldn’t have learned it from anyone better. Waddlington was known far and wide for his country hams. While Waddlington was alive, Baker took in everything he was taught. “When I got out of the military, I knew this was something I wanted to do,” he says. “Charlie Bell inspired me, not just with curing hams but with his work ethic. He’s up in heaven, and I hope he’s smiling down on me.”

Missouri judge Charley Cary still cures hams and has won the Missouri State Fair competition numerous times—“15 or 20 times. I can’t recall.” He once judged the Kentucky State Fair country ham contest, and he took the task especially seriously. “I knew every eye would be on me,” he says. “That’s how serious they are about their hams.”

People in Kentucky are indeed passionate. When the state fair hams were auctioned off last year, the grand champion winner brought $2.8 million. (The money went to charity, of course.)

Gentry Duncan’s ham brought $1,000 at the Boone County Fair. That’s real money for a 14-year-old. Next year, he’ll try for excellence once more.

“We’re always looking for the perfect ham,” says Cary. “You have to keep climbing that mountain.”