The most they have made in one day is 125. “But, our goal is only 60 today,” says Kia Nystrom, as her friend Alise Sjostrom is sealing up number 40. “There’s no way we are going to stop at 60; we have so much more ‘guts’ than that,” jokes another friend, Beth Rabe, who is adding the cinnamon and sugar mixture to the apples for each pie.

On a foggy morning last fall, seven young ladies made the trek from all over the state of Minnesota to Kia’s house — a beautiful, new farmhouse planted on a small ridge down a long, gravel road in the southwest corner of the state — for what they call Pie Day.

They became close friends—and many were also roommates—while studying at the University of Minnesota more than a decade ago and have made an annual tradition out of preparing as many pies as they can in one day for charity. The most recent Pie Day was their sixth; they ended up making 100 pies and 11 crisps (they ran out of crust before the rest of the ingredients).

The ingredients. It all started in 2012 when Kia’s sister-in-law planned a craft fair at their local school to kick off the holiday shopping season and asked Kia to sell apple pies. Kia and her husband Aaron live on his family’s farm south of Worthington, Minn., where they raise apple trees, feeder cattle and row crops. They are the 4th generation on this farm, with their three children as the 5th generation. 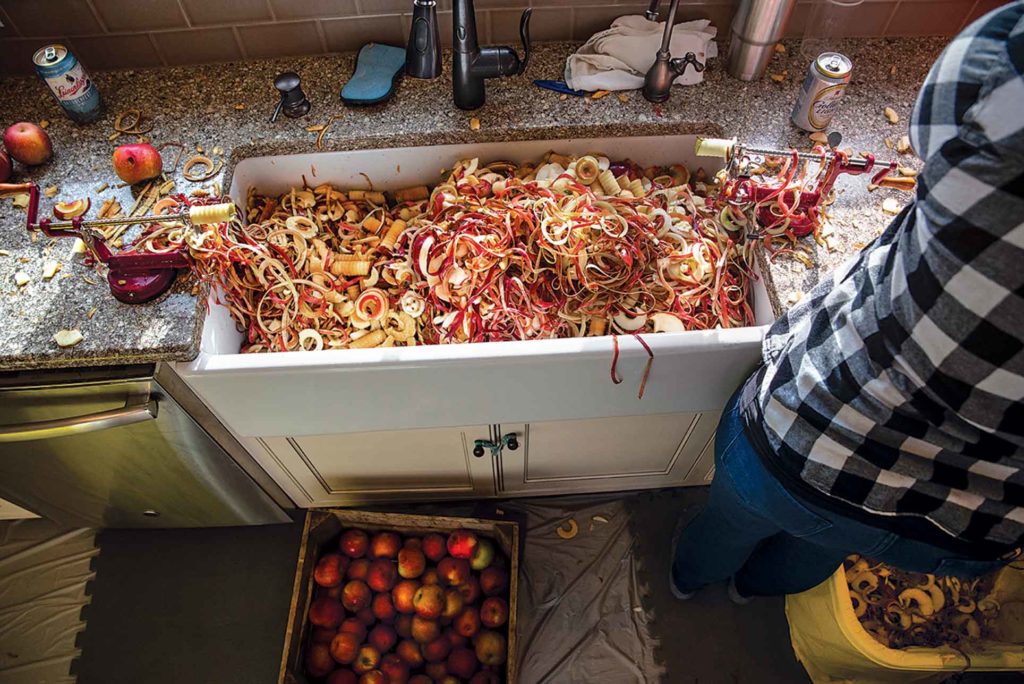 All the peelings and cores are fed to Nystrom’s cows as a tasty treat later that day.

The family has sold bags of fresh-picked apples for decades, but they have never sold prepared foods, such as pies.

“It’s always been my dream to have this, but when you get started, legally, you can’t sell pies. If I donated them and all my time, I could get the experience of how to mass-produce a pie,” Kia explains.

Kia knew she wouldn’t be able to make enough pies by herself to fill all the pre-orders for the Sip-N-Shop Craft & Vendor Boutique that first year, so she called in back-up: her college girlfriends.

“I just asked, and they came,” Kia states in her typical matter-of-fact manner.

The other girls remember it as a great excuse to visit each other.

“A few of us had started to get together in February each year, and we wanted to do it more often,” recalls Lana Beckard. Janelle Daberkow remembers telling Kia, “Oh I suppose…if there is wine involved.”

The recipe. Kia is of Dutch heritage — her maiden name is Vander Kooi — so they decided on a Dutch apple pie, and her sister wrote out the recipe on the back of a coupon for their mom’s kids clothing store.

“I’ve never told anyone other than these girls the recipe,” she says. “I had visions of framing it one day when we have a new building for the orchard, but unfortunately, it got accidentally thrown away when my nieces and nephews were helping me clean my cupboards recently.”

But don’t worry; she knows it by heart now.

The girls have taken Kia’s goal of perfecting how to mass-produce a pie to heart. They have the system down to a science now.

On the official Pie Day, Kia’s showroom-quality kitchen—complete with a custom, apple wood butcher-block island—turns into an assembly line. They first mix the full batches of filling, which they call ‘guts’, and topping. Then each girl goes to her station.

A right-hander and left-hander are stationed at either ends of the giant, farmhouse sink and start cranking on the apples from the orchard’s storeroom. 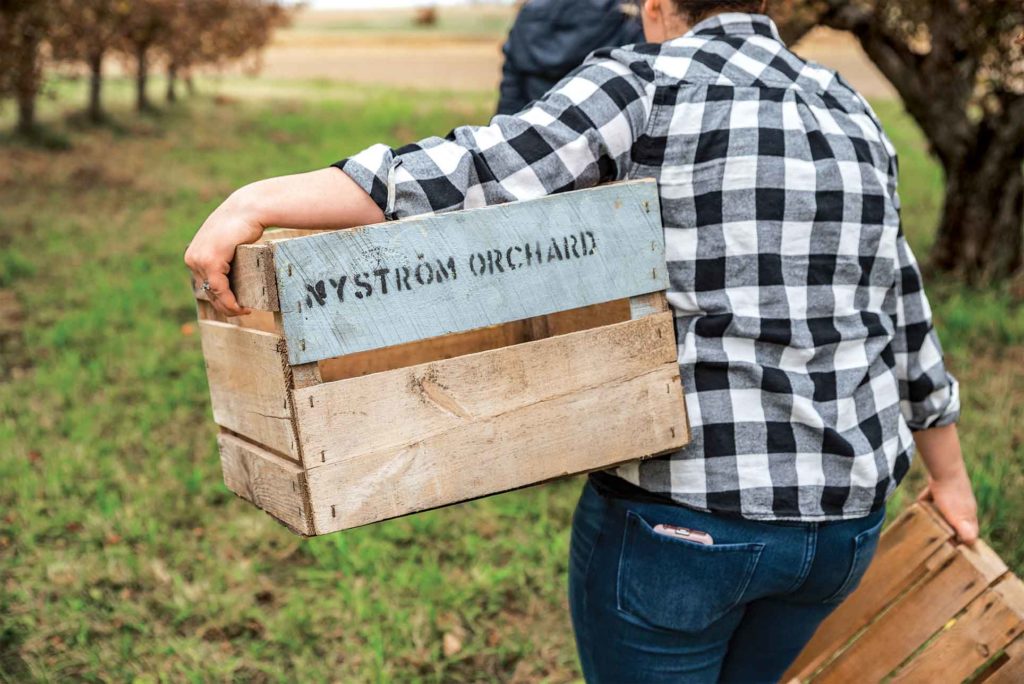 Each apple is handpicked at Nystrom Orchard in Worthington, Minn. Kia and her husband are the 4th generation to operate it.

Once the apples are peeled and spiral-cut, the next lady quarters them and cuts out any imperfections.

The next lady measures out the perfect amount of apple slices with an empty pie tin, tosses them with the pre-measured ‘guts’ in a deep mixing bowl, and then spreads the mixture into a pie tin lined with a frozen, ready-made crust.

“Other pies we sell now get homemade crusts made by my husband. But since he is not allowed in the kitchen on Pie Day, the donated pies get store-bought crusts,” Kia says with a chuckle.

The filled pie is then handed to the next lady for the finishing, signature touch.

“We do not skimp on the crumb topping,” Casey Walters assures. This is, after all, what makes a Dutch apple pie Dutch.

The next-to-last step is Alise’s. “They only trust me with the quality control,” she says through her distinct laugh. She packages each pie in a vacuum-sealed bag with baking instructions inside. The final step is to freeze the pies. The pies are layered into a dedicated chest freezer in the apple shed where they will wait until the event.

“We learned the hard way they need to be frozen immediately and completely flat,” says Rachel Daberkow, who does most of the heavy lifting to the freezer. “The first couple years Kia would have to remake a few before the event because they didn’t freeze right.”

If the pies aren’t flat when they freeze, the juice leaks, and it could get soggy or make a mess in the oven. They didn’t have a dedicated freezer when they started in 2012. But in 2014, Kia and her husband completely rebuilt their farmhouse and added storage specifically for the pie venture.

The orchard. Kia’s husband Aaron has been helping run the family’s orchard since he was a teenager and his dad died. Kia grew up across the pasture so is neither new to the orchard nor the family. Throughout the season Kia, Aaron and their kids pick the apples. Then Aaron’s mom sorts and bags them.

“They’ve been selling apples here since Aaron’s great grandfather was the farmer,” she says. “Currently, we sell out of our little shop next to the house by the honor system, and I also go into the farmer’s market.” 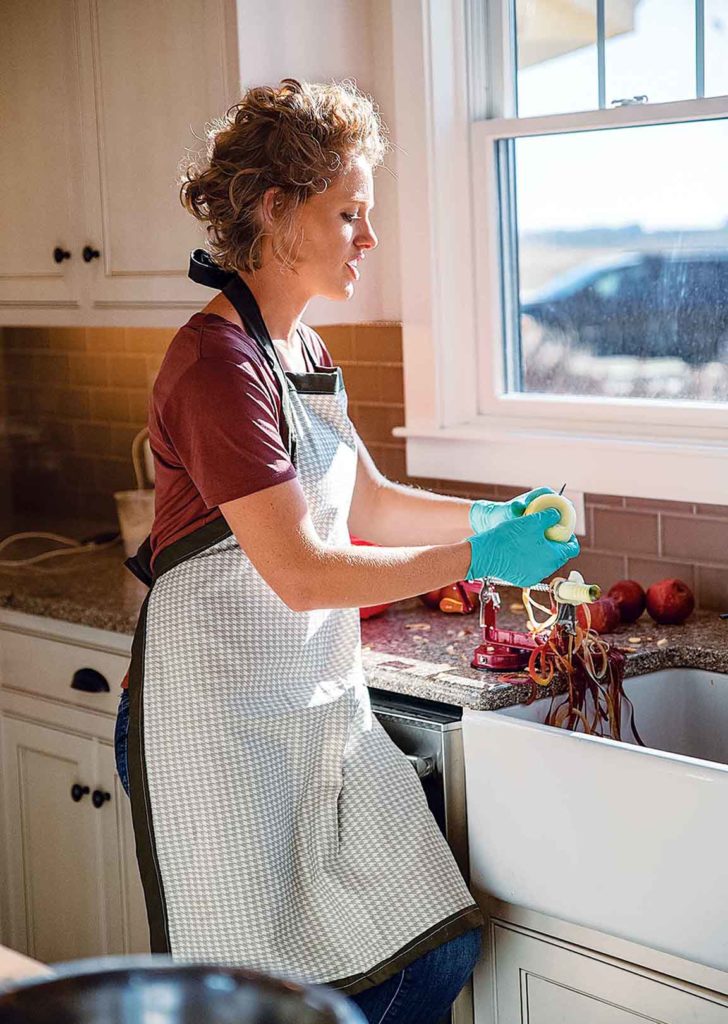 Kia is the group’s lone lefty, so spends most of Pie Day peeling apples on the left side of the sink.

They have about 10 varieties ranging from sweet to tart including Haralson, Cortland, SweeTango, and Honeycrisp. And they have some that are not as mainstream, like jelly crabs.

“One time I took a bag of jelly crabapples, which we normally don’t even pick, to the farmers market in town. Worthington is a packing plant town with significant diversity. It was the first bag I sold that day, and they kept asking for more. Here, the Asians use it to make a red curry sauce,” Kia says.

This experience was powerful for her. She loves what they do because she gets to see people enjoy their fruit and the flavor differences between each of the varieties.

Even though both Kia and her husband have great jobs off the farm — he is a veterinarian and she is a territory rep for an animal health company — they have a bigger dream for the orchard. But it is a little different than the normal addition of harvest activities for children and gift shops.

“I don’t like trinkets, and I don’t want to sell pumpkins and have kids activities. There’s nothing wrong with that, but there is another orchard a mile and a half from here and a funny farm another mile from here. I don’t want to duplicate their efforts,” Kia explains.

Instead, she wants to focus on the actual apples. She sees people’s tastes in apples changing, and she wants to help people discover other apples and learn more about their favorites.

“I want a gourmet experience of tasting apples and having pie. I want to make our apple orchard almost like a winery, an experience for adults,” she says wishfully.

She had kept this dream a dream because of the other things going on in their lives until someone she knows through her day job approached Kia for a tasting with her friends.

“I’ve always thought we needed a new orchard building before I could start doing these,” Kia recalls. “My sister told me to just do it in my house, so the group came and sat around my dining room table. It was great. They tasted each variety, and I told them how our orchard got started. I got to share why I love what we do.”

Kia’s dining room is the perfect setting for the experience she has been hoping to deliver. It looks out onto the orchard and pasture and has the restored built-in buffet from the original farmhouse along the wall.

“I also served each tasting with cheese because my grandma always said, ‘An apple without cheese is like a hug without a squeeze’,” she adds proudly.

Kia’s first tasting was a success. The group ordered 25 pies, which was her biggest order to-date. And one of the ladies asked to do it again with another group of friends. 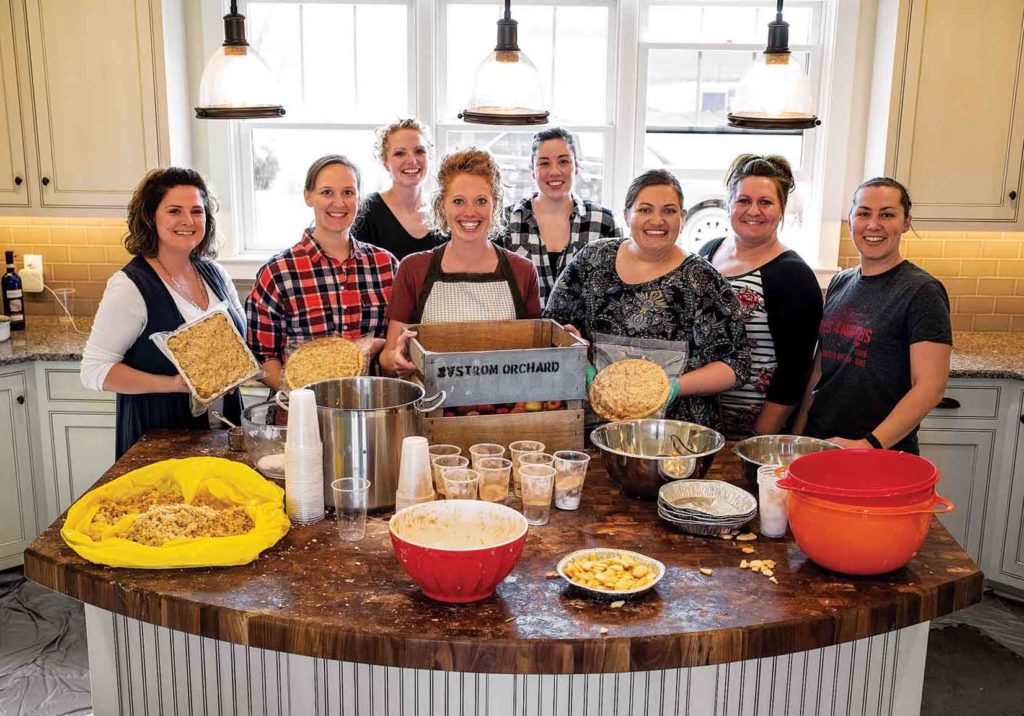 The group posed for a picture before Jenna Davis (far left) had to leave. The others are from left to right: Beth Rabe, Alise Sjostrom, Kia Nystrom, Janelle Daberkow, Lana Beckard, Casey Walters, and Rachel Daberkow.

The right mixture. What these ladies have developed is far from just a pie-making philanthropy that is helping to grow their friend’s backyard orchard business. They are making a big effort to keep their friendships strong through the test of time, distance, new jobs, marriages, babies and all the other hurdles adult life puts up.

Social media and the self-help aisle of the bookstore are filled with advice reminding young ladies to surround themselves with people who bring out the best in them and who give them support; even a catch phase has developed: ‘find your tribe.’ But it can be hard when you live an hour or two from any of the closest cities and even further from your closest friends.

Thanks to the simple request Kia made in 2012, these ladies have given themselves what many long for, and it has quickly turned into a weekend each lady anticipates all year.

They arrive at Kia’s on Friday night to catch up over that promised glass or two of wine. And in between peeling, cutting, mixing and topping tasks, they discuss the general woes and excitements of their jobs and being young moms and wives. They also dream of the day their kids—19 so far amongst the whole group — might end up at the University of Minnesota together.

The bonds they’ve developed through the annual Pie Day don’t go unnoticed by the other people in their lives, either. In fact, when a lady from the community came to buy apples while they were making pie last fall, she stuck her head into the kitchen to praise them for starting and fostering this tradition, saying: “You guys have figured it out better than we did at your age that you need to keep your friendships up. Stay connected and take care of yourselves. Kudos to you.”

They all regularly receive comments like this, and are humbled by it. But it is rare and special.

Lana adds, “Even my two sisters are jealous. They always say ‘Oh, you are so lucky’.”

Ponds With A Purpose

“Each pond is different and that’s part of the fun...".