The rules, the play, the decor and even the construction of the course itself all serve to impart lessons to its players—mainly Tom and his wife, Jeri’s, children, grandchildren and the many friends they regard as family that join them on the course.

Working for what you want is the chief lesson. “You don’t have to look 100 yards from the golf course to see an overgrown, trashy looking piece of property. Meanwhile, where we’re golfing, it’s majestic. When my grandkids see this and know that I worked to build it, they pick up the concept that nothing is handed to you. You have to work for it,” Domme says. “This beautiful place didn’t get this way by not putting out some effort.” Tom is a walking example of working for what you want. In 2017, at 66 and in the middle of building the golf course, he took up Spartan racing, notching two trifectas (completing a sprint, super and beast race in one year) and placing first in every race for his age bracket. The feat earned the first-time racer an invite to the Spartan World Championship. The golf course was more of a team effort.

Friends and family were invited to help lay sod, build patios, install fountains, plant trees and more. Participation helped all involved have a sense of pride and ownership in the course where they often spend hours together enjoying their beautiful surroundings and a bit of laid-back fun.

The course. Nine holes crisscross the 5-acre expanse bordered by Tom and Jeri’s house, their daughter Heather’s house and the old horse barn. The first tee box is backed by the barbwire property fence and is marked with Jeri’s mother’s old John Deere 111 riding lawn mower. “She mowed rocks and weeds and who knows what all with that mower out at the ranch for 60 years,” Jeri recalls.

The mower is a nod to their planned annual event, the June Deere Classic, in honor of Jeri’s mother, June, and her mower — neither of which ever shied away from a tough job. 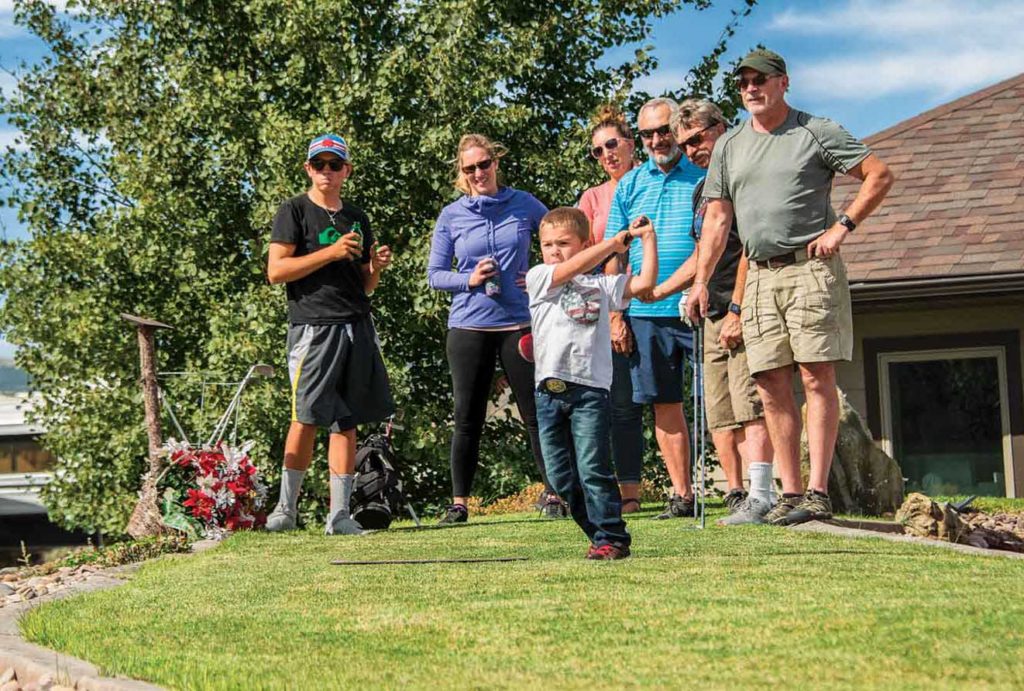 Six-year-old Nikolas gets to try out golfing without the pressures of formal links. He even helped lay sod on the course alongside his mother, family friend Meghan Doniak (blue shirt).

On this course, personal clubs are left at home. Instead, golfers are expected to use the clubs Tom has rescued from thrift shops and distributed throughout the course. They can be found leaning against trees and benches or corralled in tomato cages. Irons, aging woods, kids clubs and putters are all up for grabs, and golfers better grab quick if they want the best club at each hole.

The clubs often migrate around the course, leaving golfers with fun challenges like hitting out of the rough with a wedge sized for a grade schooler. It just adds to the light-heartedness of the game.

“You wouldn’t want to come here if you’re a serious golfer,” Tom laughs. This is no place for club throwing frustration, it’s a place for fun, relaxation and togetherness.

Tom often golfs the course with his grandson, Brett. The high school junior is a star on the school golf team. His passion for the sport was one of the reasons Tom and Jeri even thought to make a golf course when the horses had gone and the Dommes were faced with a blank slate of land.

“When Brett is on other golf courses, he feels like he has to shoot an 80 or better. It’s a serious game for him. When he golfs here, it takes all the stress out of the game. He can play a bit, hit the ball two or three times if he wants,” Tom says. Instead of a certain score, Brett is more likely to be focused on trying to hit the carpet bull’s eye Tom placed exactly 100 yards from the first tee box. As golfers prepare to tackle the course, they get to hit a couple practice balls to dial in their shots for the sized-down course.

Each time they golf, Tom grabs whatever cash is in his pocket and places it under a rock on the target. Anybody who hits the target gets to keep the cash—the prize has yet to be claimed.

Tennis balls are available at some holes for those golfers more worried about hitting a house than a target. “Not everyone has swung a golf club and they lack confidence. A tennis ball is easier to hit. It almost never goes over 20-30 yards and it doesn’t matter what it bounces off of. Even a good golfer can find it challenging to hit a tennis ball,” Tom says. 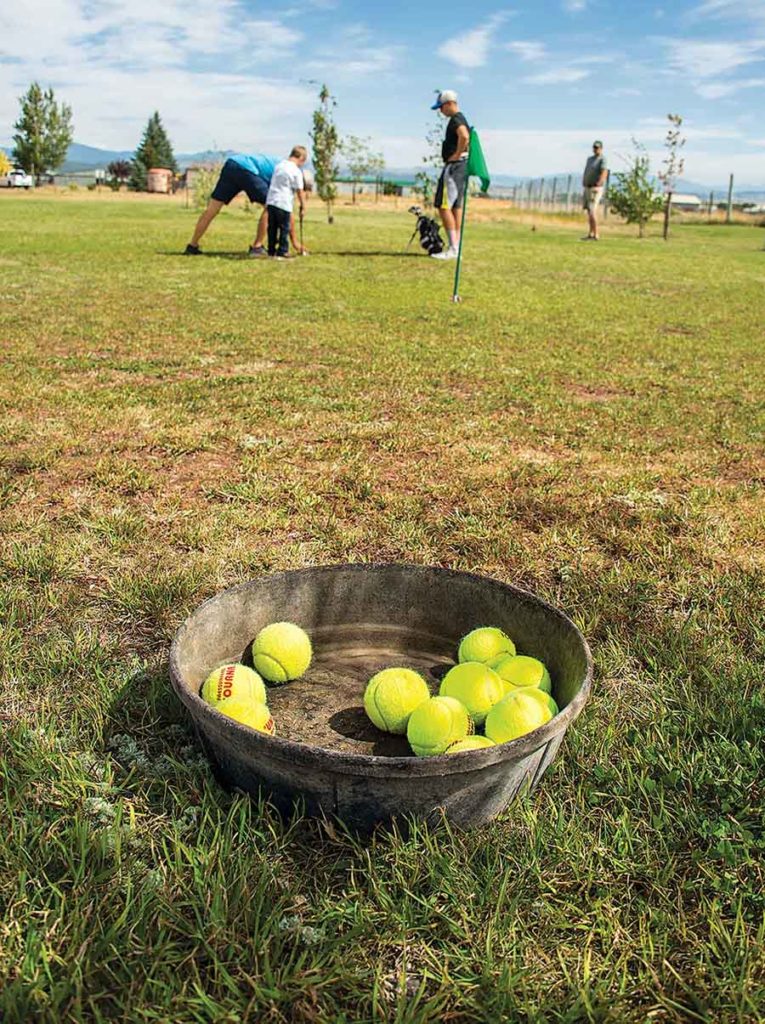 Tennis balls can be used for unsure golfers worried about hitting houses, or experienced golfers looking for a fun challenge.

Engraved placards can be found at each tee box mapping out the hole and imparting wisdom to the often young players. Lessons that can be applied to life as much as golf. The placard at the tee box for holes 5 and 8 (67 and 87 yards respectively) instructs golfers, “If you are honest and sincere, people may deceive you, be honest and sincere anyway.”

“The placards were designed for my grand kids. They encourage them to overcome anger, be patient and to be a good person no matter who is or isn’t there to see it,” Tom says. In golf and in life, he wants to make sure they know that a bad shot isn’t the end of the world. There’s always another chance to hit the ball again and do better.

Peaceful retreat. While the golf course serves as a place of gathering for the extended Domme family and their friends, it’s also a place of retreat.

What was once a dry, hard scrabble pasture rife with rocks, broom snakeweed and brush is slowly but surely transforming into a green oasis. Near the houses there are manicured greens and colorful landscaping. Further out on the links, green fairways extend through roughs where Tom and Jeri are still working to get grass growing.

It’s an ongoing and ever-changing project. But as a man with little patience for sitting still, that makes it just perfect for Tom. At the end of a long day, there’s little he loves more than spending a few hours mowing, maintaining and tinkering with the course. “It’s his down time. He’s out there whipping around getting everything all trimmed up and looking nice,” says Jeri, his self proclaimed cheerleader.

Both Jeri and Tom enjoy the hard-earned peaceful evenings. The refreshing fragrance of freshly cut grass lingers strong as the heat of the day slips away to a cool mountain evening. The soothing sounds of water can be heard trickling down the waterfall and along the stream in the water feature on the Hole 4 tee box that sits just off their back patio. 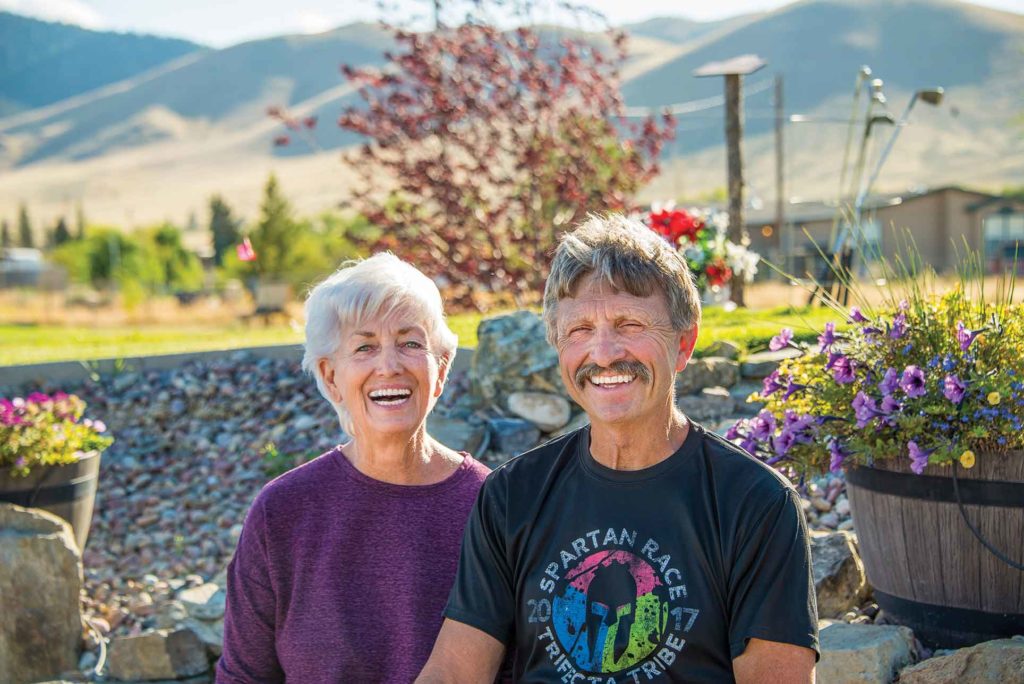 Tom and Jeri love sharing their Sunday afternoon with the golfers that gather.

It’s the perfect place to sit and reflect on what’s important and the impact they hope they have on others. It must be working. Heather and her friends have lovingly dubbed her dad “Father Tom,” due to  his constant mentorship to so many.

Planting seeds. As retired teachers, Tom and Jeri are well experienced in holding a position of positive influence on those around them. In there family, just as they did at school, they hope to set a strong example of how to live well, work hard, and never stop growing as a person. They’re thrilled to watch the characters of their children and grand children continue to develop.

“I may not see the positive effects of my work and actions right this moment, but maybe 20 years from now the kids will look back and be proud that I did Spartan races, built a golf course, took them white water rafting and put in all that work,” Tom says. And maybe they’ll try to do the same in their own ways. Who knows what their golf course will be.

“I never stop trying to be better or trying to be a better example for my kids and grand kids. Character building should never stop. I hope I give them someone to look up to and be proud of,” Tom says.

From On Life & Land: Rhythm of the Ferries

Join field editor Lorne McClinton and On Life & Land for a first-hand look at life on Canada's Discovery Islands.