When it comes to aquaponics—the combination of hydroponics and fish farming—it is safe to say that Jeff Jirovec is hooked. “I like how the fish and the plants and the microbes all work together in a symbiotic environment,” he says.

That soil-less ecosystem has allowed Jeff and his wife, Heather, to buy some ground of their own. On their 11-acre property just west of Lincoln, Nebraska, the Jirovecs have been able to get their foot in farming’s door with their combination of horticulture and aquaponics called Grow with the Flow. A 2,000-gallon fish tank and 27 “grow towers” are at the heart of this operation, which produces plants ranging from culinary herbs to cut flowers, and from garden produce to perennial plants.

“Aquaponics drives our system, even though we have added some production in hoop houses,” Jeff explains. “Even things like the tomato plants that we grow in soil are fertilized with the nutrients from our fish for the seedlings. One thing that makes aquaponics so cool is the fact that you can grow such a variety of plants in different ways.”

Vertical farming is all the rage these days, with growers finding ways to squeeze the most efficiency and environmentally friendly production into the tightest of spaces. Aquaponics is one of those approaches, teaming the use of hydroponics (growing plants in nutrient-rich water) with aquaculture.

Here’s how it works. Fish in large tanks are fed each day. At Grow with the Flow, they are goldfish, which are not harvested—but they could be a food fish, such as tilapia. The ammonia-rich fish waste is collected and sent to biofilters, where bacteria in the nitrosomonas and nitrobacter families convert this form of nitrogen into plant-friendly nitrate. A pump sends this nutrient-rich effluent to the grow towers. Plants extract the nutrients, thus filtering and cleaning the water, which is returned to the fish tanks in a closed-loop system. 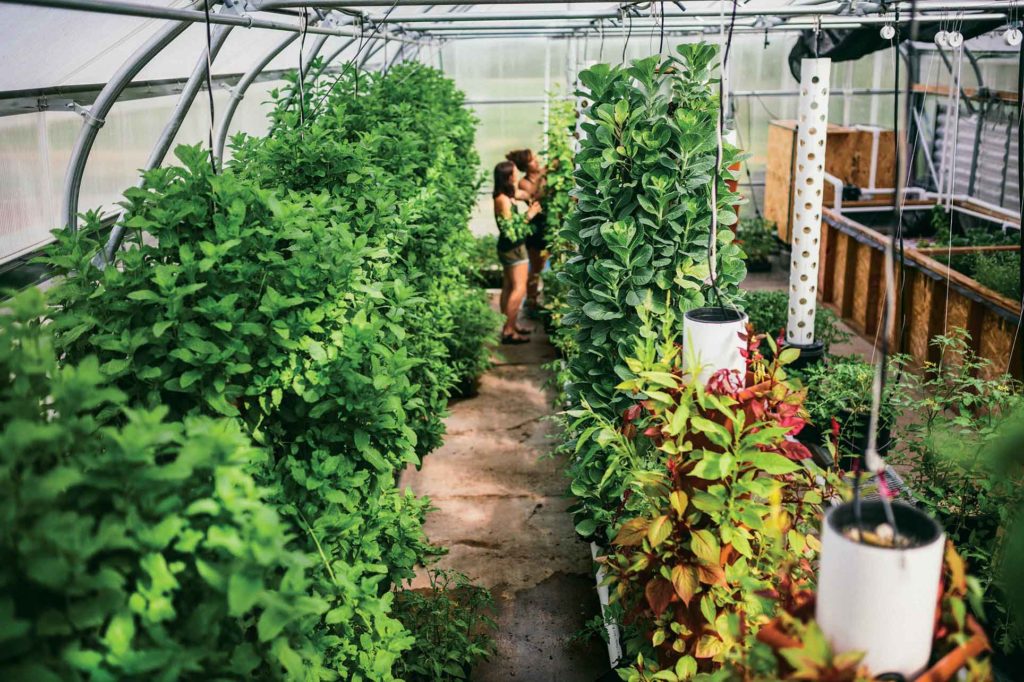 Wide net. Jirovec came across the aquaponic approach during his college years, building small-scale systems and experimenting with different varieties of plants. Five years ago, he and Heather took the plunge into full-scale farming. “We had success with the small-scale systems, and I realized that there was a scalable business opportunity,” he says. “We realized that everybody has a connection to agriculture, and we wanted to create a business that respects local, natural, and sustainable products. And we wanted to cast a broad net that would make people aware of the aquaponic advantage.”

That advantage is a point Jeff and Heather share with their customers, whether at farmers markets or visiting the operation on farm tours (details on farm tours are available on the farm’s website, gwtfaquaponics.com). “Aquaponics uses only a fraction of the resources required by other farming methods,” Jeff says. “It uses only about 15% of the land and 5% of the water if these plants were grown in a conventional system. That’s a significant contribution to sustainability.”

Farmer-florist. The Jirovecs not only talk with their customers, they listen. Hearing the needs of customers is how they came to be farmer-florists. Grow with the Flow sells at farmers markets such as the Haymarket, an expansive market in downtown Lincoln. Customers liked the cut flowers offered by the farm, and snapped up bouquets. “Then they started asking us if we could do flowers for their wedding,” Jeff recalls.

So that’s why Grow with the Flow now has a staff floral manager and a floral designer, as the operation not only provides flowers for the wholesale market, but now has expanded to retail bouquets and custom arrangements as well as weddings and events. “Opportunities have really opened up for us on this side of the floral industry,” Jeff says.

Heather explains that, just as the interest in local foods created a Slow Food movement, there now is a Slow Flower movement that has been born from a desire to bring back small-scale flower farming. “More brides are choosing local blooms,” she says.

Sustainability is a watchword even in the floral business; the floral industry has been dominated in recent years by large-scale growers who produce blooms thousands of miles from their eventual customer. A florist selects and orders flowers from a catalog; these blooms may be flown halfway around the world, taking days to reach their destination. 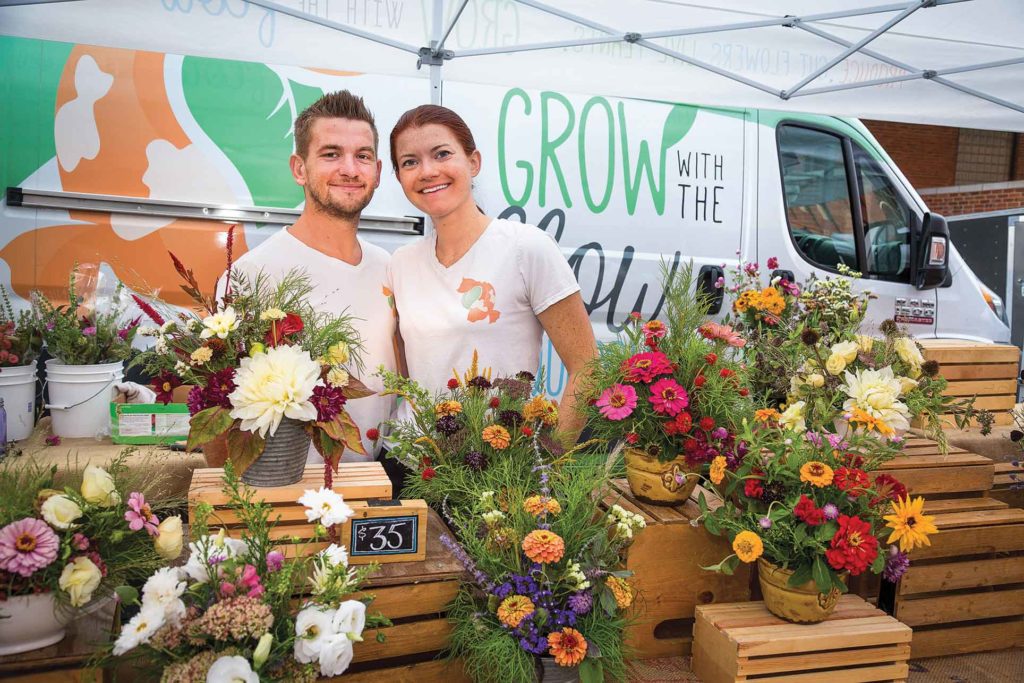 Jeff and Heather Jirovec call their aquaponic horticulture business Grow with the Flow.

“There’s been little concern about the environmental impact of how people source their flowers,” Heather says. “Local flowers are higher quality, have a longer vase life, complement the native landscape, and are in harmony with the seasons.”

It is the demand of this emerging class of consumer, one that values craftsmanship over consumerism and artistry over trend, that is driving the Jirovecs to expand their Grow with the Flow operation. The farm now uses about 3 acres of the property for its aquaponics, hoop houses, and outdoor production. The other 8 acres are rented to a neighbor, who grows hay on that part of the property. Plans are in place for a larger aquaponics setup as the farm expands to meet demand.

Jeff Jirovec also has considered franchising the Grow with the Flow concept as a way to expand the business. “I think we eventually can franchise both rural and urban Grow with the Flow aquaponic farms,” he says. “We have relationships with some large retailers, such as Hy-Vee supermarkets, so it would be a chance to help match the people who want to be farmers with the market for local and naturally grown products.”

Of course, one of the lures of aquaponics is the fact that it can scale to any size; there’s even a one-fish system (it supports a planting of microgreens) that fits on a kitchen counter. “There are virtually no weeds in an aquaponic system, so it’s an excellent option for people who may be elderly or disabled,” Jeff adds. “Life-long gardeners who had to give up their hobby can get growing again.”

If it sounds like Jirovec is promoting aquaponics again—well, that is what he does. “It’s fun when I’m at a farmers market and I hear a customer explaining aquaponics to another customer before I have the chance,” he says. “I like to hear them describe what they have discovered about the system I discovered just a few years ago.”

Ponds With A Purpose

“Each pond is different and that’s part of the fun...".