The trend began when two women in Oregon combined their separate happy places — one hanging outside with her goats, the other seeking exercise in a farm pasture.

“This whole goat yoga thing is just as surprising to me as it is to everyone else,” says Lainey Morse, founder of Original Goat Yoga in Monroe, Ore.

Back in 2016, Morse was struggling through illness and divorce. Her goats became just the comfort she was seeking.

“It was so therapeutic to be out in nature with my animals. They were so calming that it was hard to have stress. I would forget I was in pain because the goats are really funny,” she says.

Morse started inviting friends over to hang out with her goats. They, too, had the same positive mental feelings.

“I called it goat happy hour. Everyone who came left happy. It didn’t matter who they were; it was the same result,” she says.

Then, a yoga instructor friend asked to host a class in her pasture. “I said ‘okay, but the goats are going to be climbing all over the humans.’ And she said: Cool!” 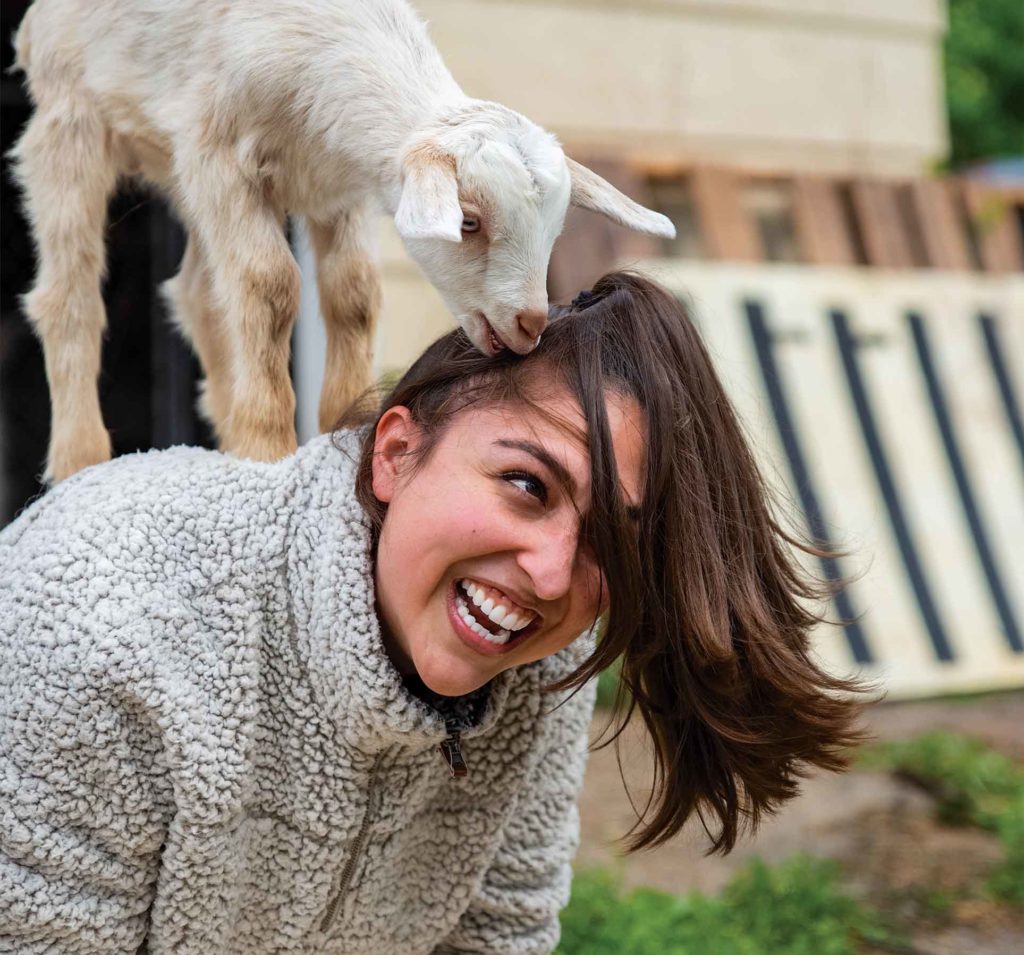 It is typical for the baby goats to jump on top of the yogis during class, and most—including Rebecca Faria, who took a class at GlennArt Farm—love it.

Social media fame. Since that first experimental class was held, goat yoga has taken off to become an Internet sensation. The Instagram-worthy photos that participants capture during class are enough to prove that this viral trend is here to stay awhile.

The concept is simple. Yogis go about their routine amongst baby goats; in turn these cute critters are doing their routine on bending humans —climbing, chomping, and at least on occasion, other business, too!

Animal-assisted therapy is not a new idea. Improving certain mental and physical conditions by being in the presence of animals, such as horses and dogs, is a proven concept. And since a primary benefit of yoga is stress relief, putting the two practices together makes sense.

Hundreds of studios and farms across the world have co-opted Morse’s formula, even changing their traditional Hindu ‘namaste’ greeting to ‘baaamaste.’

Jennifer Montgomery of Galena, Ill., is one such goat lover who has built a satellite location of Morse’s original company. She was so smitten with goat yoga while on vacation that she came home and bought a farm.

Montgomery, like Morse, had been going through a difficult time, losing her parents and her corporate job simultaneously. Admittedly, she believes that the 90 minutes spent in her first goat yoga class helped regain herself again.

As a new farm owner, making a career out of hosting goat yoga helped pave the way to finally have some goats of her own.

After much thought and planning with her husband and their (human) kids, they spent several months learning how to care for goats properly and how to teach yoga — while they renovated a run-down barn. They crafted goat stalls on one side and a yoga studio on the other, complete with heated floors and a handicap-accessible bathroom. 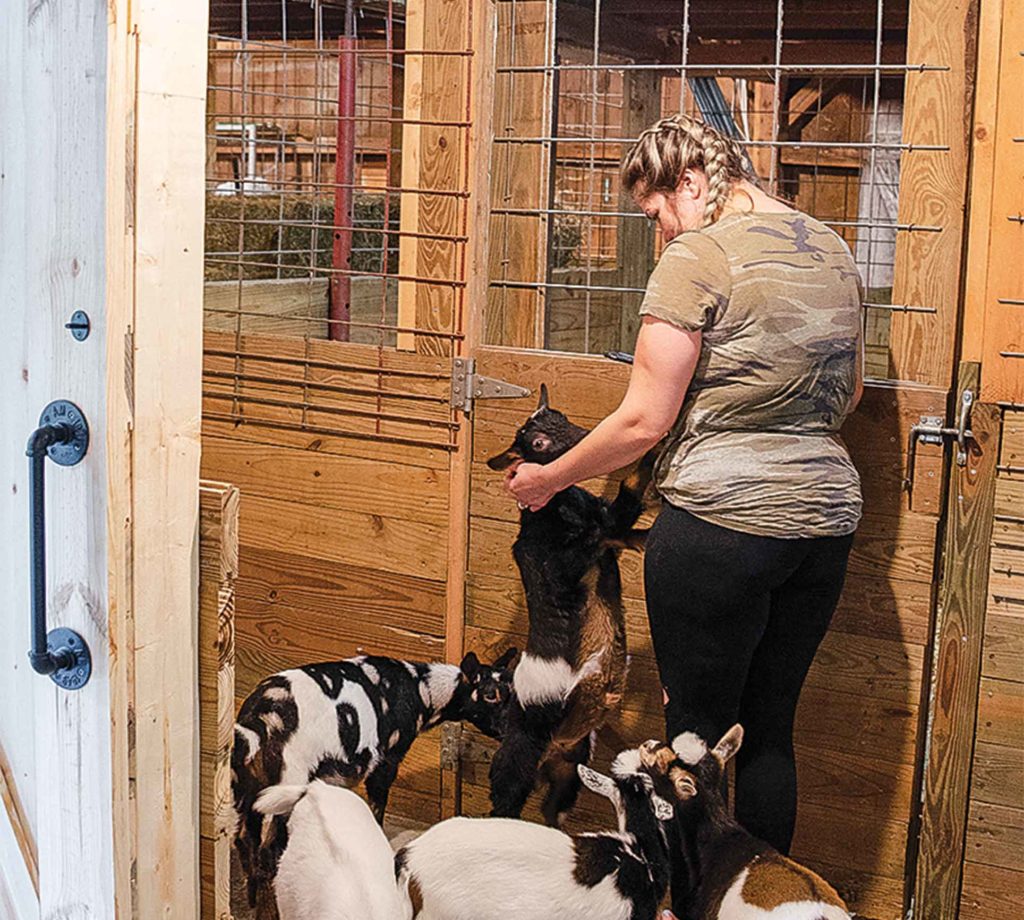 Class participants, including Holly Clancy, get to hang out with the goats as long as they want after class at Original Goat Yoga Galena.

Montgomery begins her goat yoga classes like most yoga instructors, asking the participants to leave all their cares aside during class. While some may find this difficult, people who have tried goat yoga say that’s no longer the case. Being in the moment with goats, in their barn or pasture, quickly melts their cares away.

“It is so relaxing and funny. It definitely takes your mind off everything else, and it is a good workout, too,” says Kelly Borgia of New Lenox, Ill., after taking Montgomery’s class.

Bridging rural, urban. The agritourism feature of goat yoga is a big reason Morse’s seemingly crazy idea has caught on.

“The neat thing about this goats-and-yoga combination is that it brings rural communities and the urban communities together,” Morse says. “It unites these two very different types of people in a really cool manner.”

Another couple, David and Carolyn Ioder, began offering goat yoga classes in 2017, nearly a decade after they started their urban farm in Chicago’s west side neighborhood of Austin.

“I started with chickens when our son was in 4th grade. I was homeschooling him, and needed something in the house that I was interested in,” Carolyn explains. Through the years, she tried beekeeping and then added goats a few at a time.

Their backyard farm, which they named GlennArt Farm, quickly became more than just a pastime for the couple, who are both one generation removed from the farm. It became a way to teach the neighborhood kids about agriculture.

“We have created a sort of ‘agrihood’ giving the city dweller nature and the concept of life with animals. The kids in my neighborhood know where eggs come from, and they know goats don’t have upper teeth,” she says.

The Ioders saw goat yoga as a perfect addition to their farm because they had already noticed the positive affect goats had on their neighbors. The area they live in is considered one of Chicago’s poorest, most challenging neighborhoods. 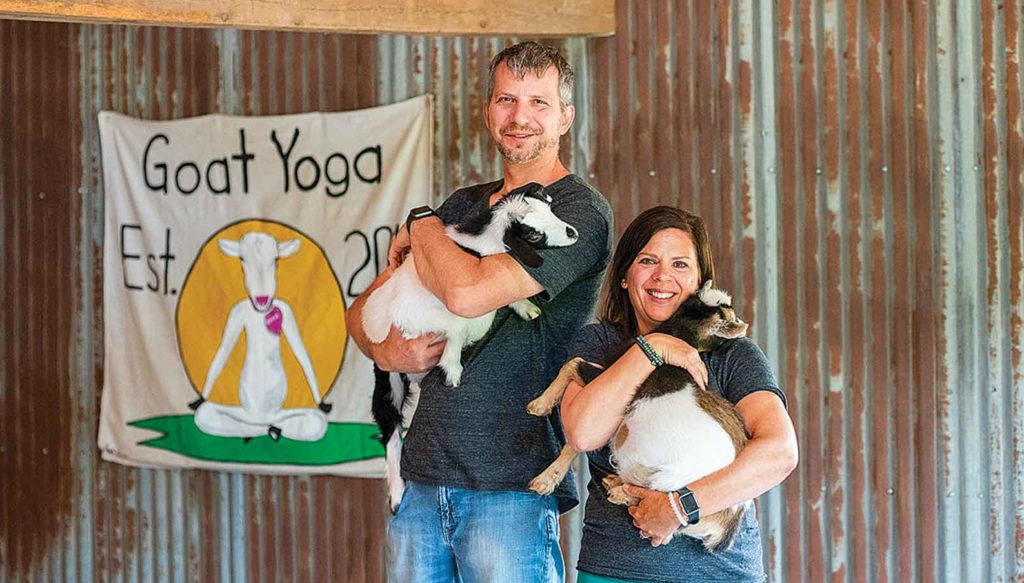 “We are awkward. We are way outside their realm of reality,” Carolyn says about relating to their neighbors. “That makes them stop and think about something else other than the poverty, the problems, and all the unpleasant stuff that goes on around here.”

Goat yoga also makes it possible to finally turn a profit on their farming hobby, which already had revenue streams from goat milk, eggs, and AirBnB room rentals. The Ioders now host 40 classes a summer and charge $26 per participant.

On Memorial Day in the pouring rain, a group of friends from the other side of Chicago came to escape normal city life. The class, which was scheduled in the nearby community garden, was rained out, so the group participated in a ‘Goat Chill’ in the Ioders’ garage-turned-barn instead.

They all said they would come again. The smiles on their faces confirmed their enjoyment, even if they now all smelled like they’d been cleaning pens at the county fair.