Feeding the birds is a popular activity in 57 million U.S. households, where homeowners spend more than $4 billion annually on the hobby. Given that scale, researchers have become intrigued with the ecological impact that feeding has on the birds, the behavioral effects on the people who feed them, and the possible environmental impact on the backyard landscapes where feeding occurs.

For more than 30 years, the Cornell Lab of Ornithology’s Project FeederWatch (https://feederwatch.org) has gathered observations from 20,000 bird enthusiasts in the U.S. and Canada. These ‘citizen scientists’ have turned a backyard hobby into a stream of data that feeds multiple research efforts.

“We’ve proven that backyard bird feeding results in positive effects such as improved winter survival, increased population and expanded geographic range,” says Emma Greig, FeederWatch’s project leader. “However, there are also negative impacts, such as increased predation and disease. But the greatest benefit is that backyard bird feeding is a great way for people to connect with nature.”

Greig says the impact of backyard feeding can alter the distribution, and perhaps the migratory behavior, of some bird species. “The expanded range of Anna’s hummingbird is one example that we’ve documented with the FeederWatch data. In the past two decades its range has expanded nearly 500 miles north from California and it now commonly overwinters in Alaska and Canada.”

“These hummingbirds are small and need food daily to maintain a high metabolism. Our data shows their expansion mirrors an increase in people who’ve provided nectar feeders,” adds Greig. 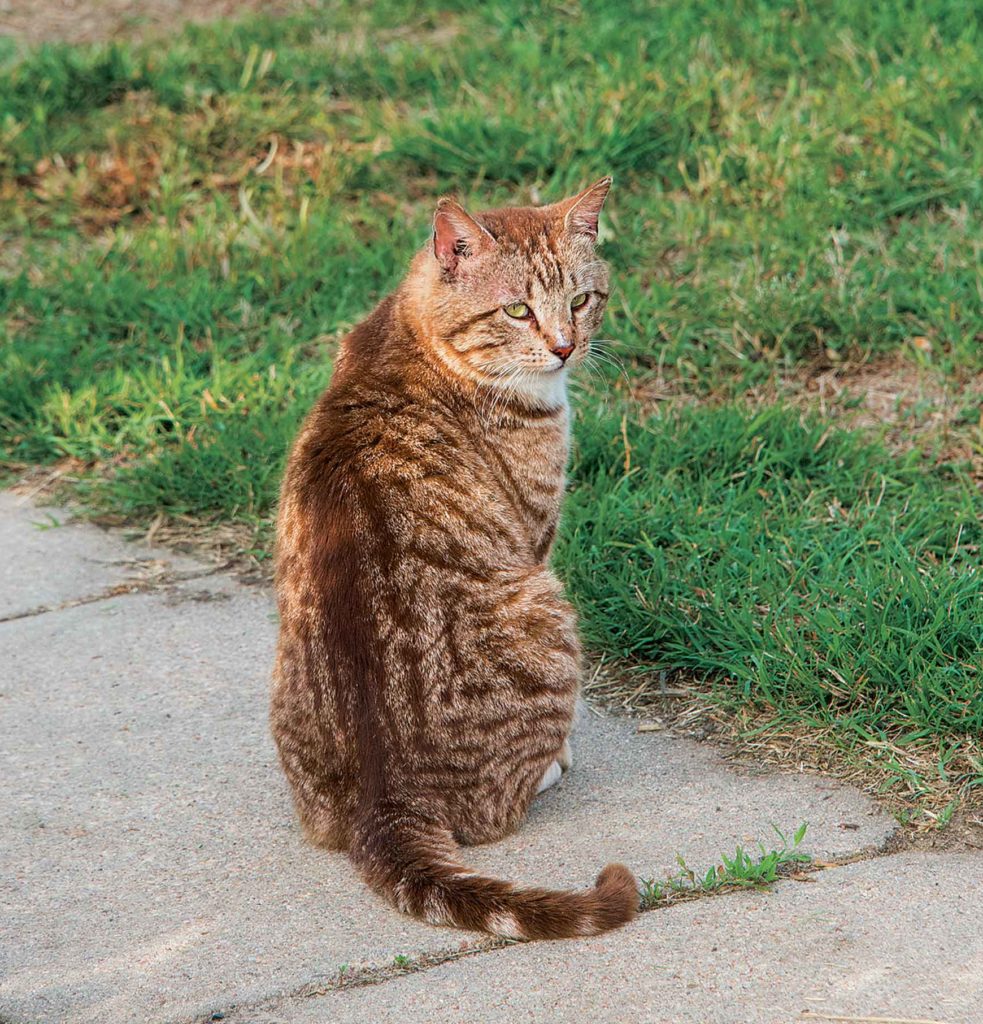 “It’s hard to say whether these shifts in the population and migratory patterns of individual bird species is positive or negative, but it’s obvious that feeding wild birds is having an effect and more research is needed to measure it,” says Greig.

A negative impact of feeding birds is that by concentrating birds, it can increase the risk of depredation by hawks and domestic cats, which together account for 80% of the attacks observed near feeders. “I can’t stress strongly enough the importance of keeping cats in the house—they’re a huge threat to birds using a backyard feeder,” says Greig.

He says risk of disease and flying into windows are other negatives. “Homeowners can reduce disease by cleaning feeders regularly, and a simple way to prevent window strikes is to put the feeder close to the window, so birds don’t hit at high speed.”

Observing nature. Urban development has steadily pushed wildlife habitat out of sight for most homeowners, but backyard bird feeding brings nature back to just outside the window pane. Recently, researchers from the Cornell Lab, Virginia Tech and the University of Georgia surveyed FeederWatch users to gauge reactions to this ringside view.

“We were interested in what natural changes people observed and their emotional and behavioral response to them,” says Ashley Dayer, assistant professor of Human Development at Virginia Tech. 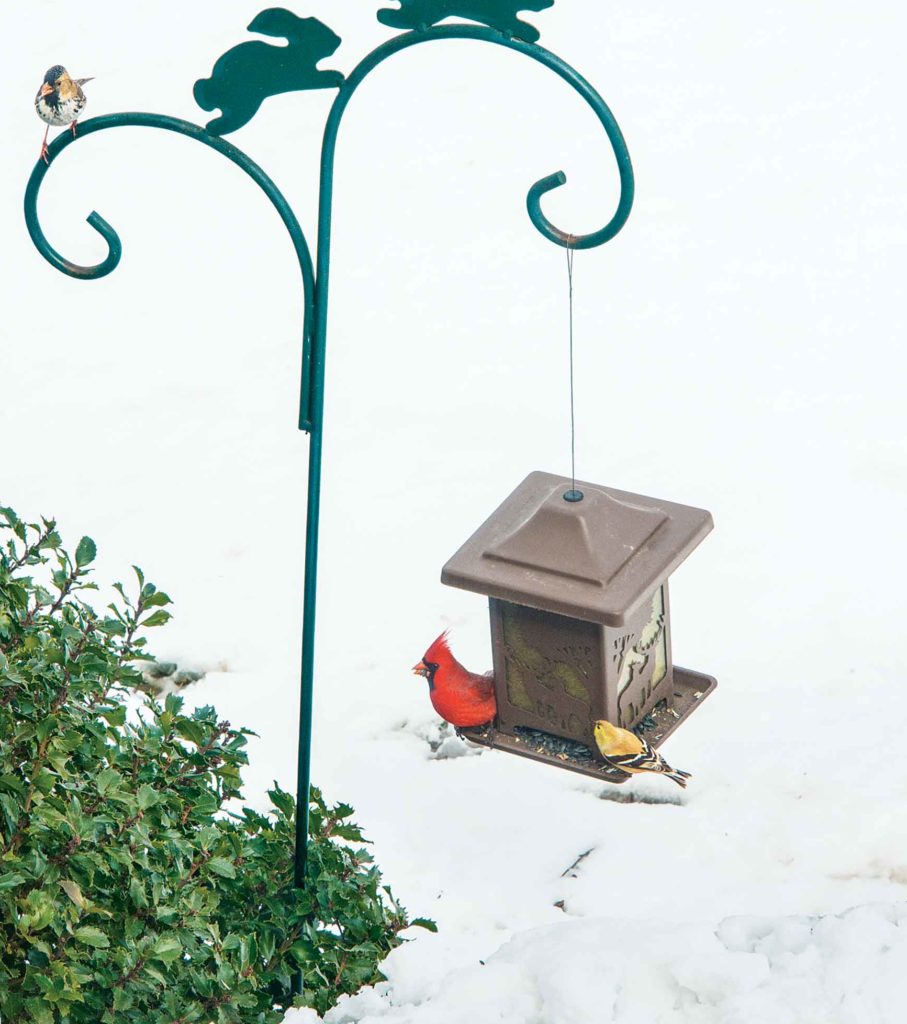 Backyard bird feeding is a popular winter hobby for nearly half of all homeowners.

“Respondents largely perceived the impacts of feeding wild birds was positive—74% thought it increased the number of species in their area, 64% thought it increased winter survival, and 57% thought it improved nesting success. People responded to these positive effects by putting up more feeders and filling them more often, generally without concern for the additional cost,” says Dayer.

The survey revealed disdain for predation by domestic cats—95% would take action to prevent it. Meanwhile, 69% of respondents said seeing a hawk take a bird at their feeder was a ‘natural event’.

FeederWatch data is also used to learn more about how birds interact at feeders. Using observations from the project’s citizen scientists—and a computer analysis tool similar to that used to rate college basketball teams who may never play—the ongoing research ranks the competitiveness of 136 bird species and gives each a ‘fight score’.

“We’re finding dominance is largely based on body size, but there are exceptions, like the pugnacious Rufous hummingbird, which fights far above its 1/4-ounce weight class, and the Mourning Dove, which is suitably tranquil for its size,” says Greig.

Spreading weeds. At the University of Missouri, researchers are concerned about backyard bird feeding for a totally different reason—the potential of spreading weeds. “Our focus was on the possible spread of the pigweed species that are plaguing agriculture, but we found seed of many grass species that would be difficult to control in a home lawn as well,” says Eric Oseland, a graduate research assistant in weed science.

Oseland analyzed the contents of 98 bird seed products and found weed seed in all of them. “We found the pigweed species in 94 of them with the worst at nearly 3,000 seeds per pound. Grass seed (foxtail, crabgrass, etc.) was found in 76% of the seed mixes ranging up to 1,700 seeds per pound.”