Stacey Anderson Belt, Emergency Manager for the Jackson County (Oregon) Administrator’s Office, thinks about fire more than most. She has coordinated community responses to wildfires across the West throughout her career. Before moving to Oregon, she lived for 13 years in Nevada, where she was evacuated from her rural high desert home twice.

So when Stacey Belt looks at a house, she analyzes it with an experienced eye.

“When we see five or six houses burned and two skipped, it’s based on the preparation the homeowner has done,” she says. “When firefighters are defending a home or property, they put their lives on the line. When they’ve got a house with a lovely hedge of juniper, or a house with a nicely thinned treescape 150 feet from the house, they’re choosing where they can operate more safely and effectively.”

Belt says her Nevada home, though it was situated on five acres of fast-burning grass and brush, was a likely place for firefighters to protect. 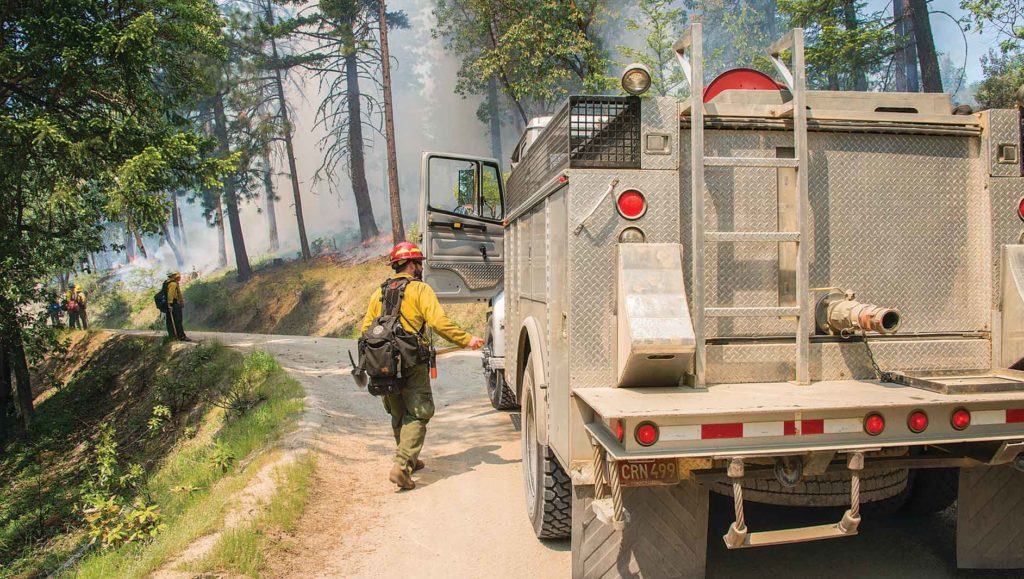 “I had cleared around the house, I used decorative stone rather than bark as cover for plants and gardens,” she says. “I had a good, solid well and irrigation—even some extra, portable, cheapie sprinklers we could turn on and sprinkle the house.”

Firewise landscapes. Firewise landscaping was key to Belt’s fire plan. Part of the firewise strategy is reducing the density of fuel, especially near the house. Part is selecting plants that are less prone to intense burning. And the final step is keeping some distance between low-lying plants and tree branches—avoiding what firefighters call “ladder fuels.”

A well-watered lawn makes a perfect firebreak around a house. Moisture-rich and low-growing, it’s a great way to slow a fire blasting through dry, wild growth in the surrounding landscape.

Though a basic tenet of firewise landscaping is creating at least a 30-foot defensible zone around your house, it doesn’t have to be completely bare, notes Tyler Averyt, Firewise coordinator for the Oregon Department of Forestry in Grants Pass, Oregon.

A low, slow burn is aided by the selection of landscape plants that are not twiggy, prone to stockpiling dead leaves or needles, or rich in flammable pitch or resin. Instead, choose from a wide selection of firewise plants that store moisture, like sedums, ice plant, or aloe, or plant fire-resistant shrubs like Forsythia, chokeberry, lilac, or Spirea. 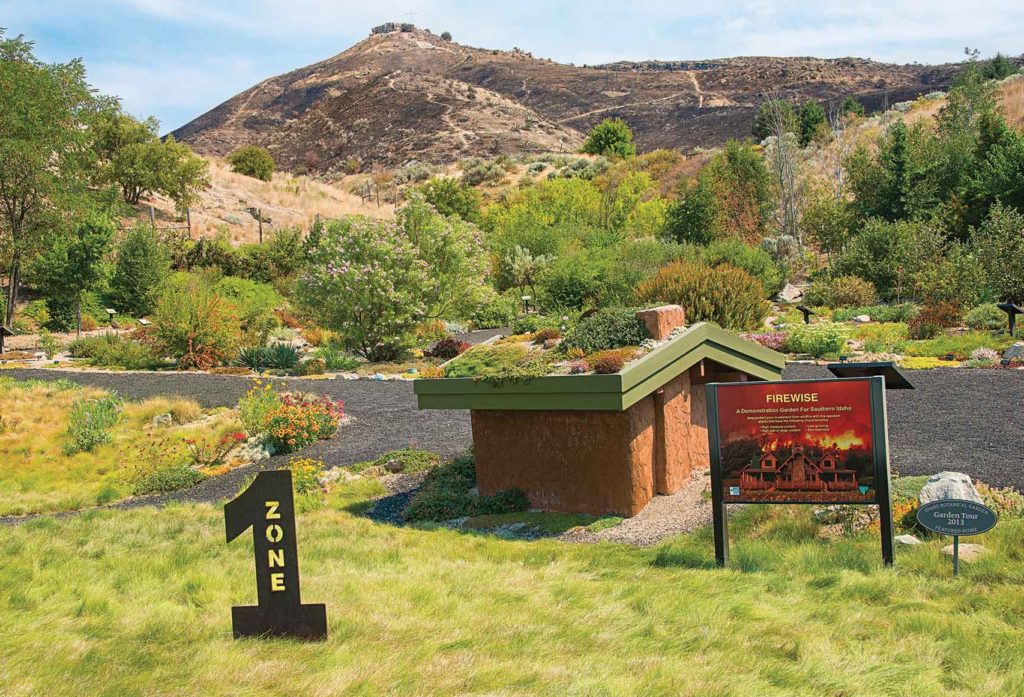 The Firewise Garden at the Idaho Botanical Garden in Boise illustrates the beauty and diversity of firewise plantings.

Break shrub plantings into small groups no more than 15 feet wide, and leave space between shrubs that is twice the height of the vegetation.

Various guidelines help homeowners gauge a safe zone between low plants and tree canopies: a vertical gap of six feet between shrubs and lower tree branches, or a branch-free gap that is three times the height of the understory vegetation.

Burning embers. Though roaring flames dominate the media’s coverage of fire disasters, the most dangerous threat to your home is just a fraction of an inch long: burning embers, which can be blown a mile or more ahead of the main fire.

“There’s a misconception that it’s a wall of fire that will burn your house,” says Averyt. “It’s really the embers. Anything flammable will burn, so you want a five-foot fuel-free zone directly around the house.”

That starts with gravel, flagstone, or concrete immediately around the house, like Belt’s property. But Averyt lists other dangers that can act as fuel beds when burning embers rain down from the sky.

“Make sure your vents are properly sealed with 1/8-inch vent screens in your attic and under your deck,” says Averyt. “The cushions on your deck furniture: do you have a plan to get rid of those if there’s an approaching fire? Moving firewood off the porch in the summertime: sure, it’s convenient in the winter, but let’s move it outside the defensible zone, away from the house in the summer. And make sure to clean your gutters.”

“People say, ‘there’s only one way out,’” Belt says. “I would encourage people to explore little-known roads—trails, really—and practice evacuation. Try the opposite of your normal driving-to-town routine.” 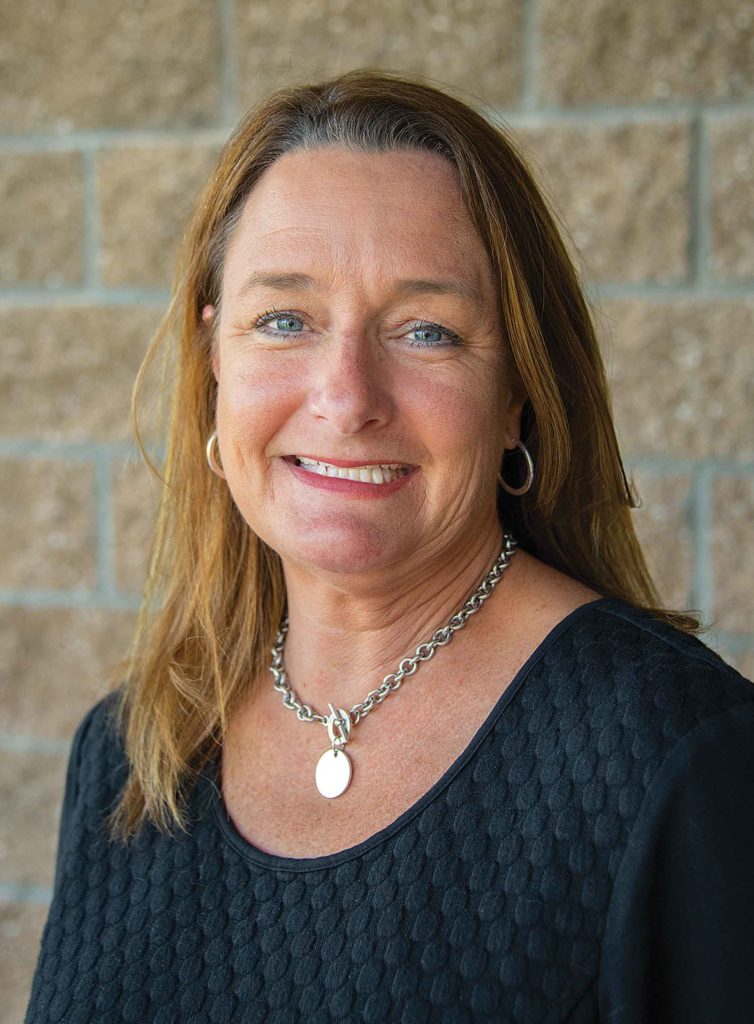 If escape is impossible, she notes, head for a park or ball field—a large, irrigated, grassy space.

Your driveway is vital to your escape and maybe just as crucial to firefighters looking to protect your homestead. A well-marked driveway, cleared of overhanging branches, is essential to attracting firefighters, notes Averyt. Make it easy to drive a large, heavy fire truck up your driveway. Post signs signaling turnouts or buildings up ahead.

“Many of these fire agencies rely on volunteers.,” he notes. “Their daily job isn’t driving these large fire trucks. Let them know it’s safe to continue, that the house is up ahead. You want that warm, welcoming driveway that says, ‘come make a stand here.’”

Ultimately, your firewise landscape is literally your line in the sand in the event of a fire.

“We don’t have enough fire trucks to be at every house,” Averyt notes. “You have to prepare your house to survive a fire, with or without any attention from a fire truck or firefighters.”