For cheesemaker Amelia Rogers-Jones, watching sheep graze on green spring pastures is about the most calming experience she’s ever had. For the next six months, she is interning at Green Dirt Farm, a place in the scenic hills near Weston, Missouri, a small historic port town on the Missouri river, about 45 minutes north of Kansas City.

The farm is just one stop for her — Rogers-Jones is traveling the country to continue her knowledge in the art of cheesemaking, and for her, sheep are new. “Being able to come here and connect with the animal and see what they’re doing and what they’re eating really helps you see the product you’re working with differently.”

Never eaten sheep cheese? You probably have and didn’t realize it. Roquefort is made from sheep’s milk. So are the Pecorino cheeses of Italy — Romano, Toscano, Sicilian. Spain produces the famous Manchego cheese. And Portugal cheeses? “Those are the most fabulous cheeses. Really, really wonderful,” says Sarah Hoffmann, owner of Green Dirt Farm.

She hasn’t been in business very long — just 11 years — but she already is making a huge impact in the world of artisan cheeses. She knew little about sheep when she started, but wherever she moved as a child, her father, who was in the Navy, always made sure the family lived on a small farm. Hoffmann loved the experience. Sheep were always her favorite animal on the farm. 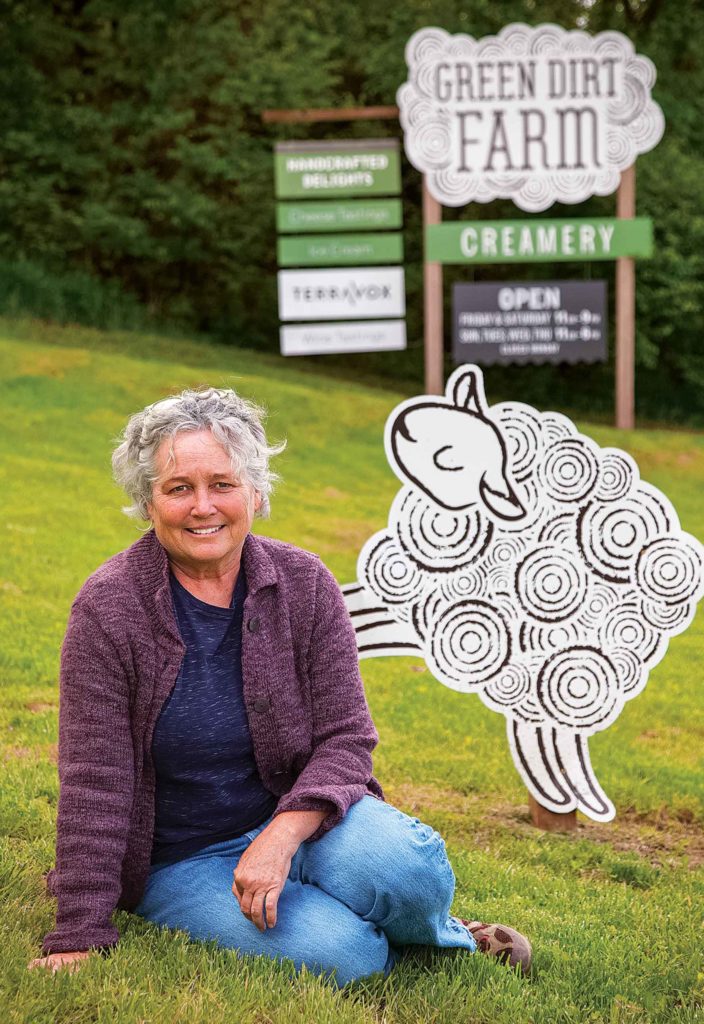 Sarah Hoffmann just outside the farm’s creamery in Weston, Missouri.

Family decision. But her professional life as an internist took her away from farming. “Then, when I was having my third child, I started thinking about what I wanted for my kids,” she says. “How I wanted them to grow up. I wanted them to get outside and learn the value of hard work and learn what it is like to grow up on a farm.”

“After some soul searching with my husband, I finally decided to step back from medicine and try starting a business on a small farm.” (Her husband stayed with the secure income: cardiology.)

After going to a dairy sheep conference in 2001, she learned that the U.S. imports about 95 percent of its sheep cheeses, and that sheep dairying is a fledgling industry in this country. The U.S. only has roughly 100 farms that produce sheep cheese, and most of them have small herds of 20 or so ewes. That and the awareness that American consumers have a growing taste for artisan foods — and a greater appreciation of what Europeans have done for centuries — set Hoffmann on her course. Today, Green Dirt Farm milks about 100 ewes, which produce a third of what the creamery needs. Hoffmann buys the rest from neighboring Amish farmers.

Spring is lambing season, and Hoffmann’s daughter, Eliza, is walking the pasture, finding newborns, weighing and recording them. Then she’ll milk the ewes to relieve udders of congestion. The milk isn’t suitable for making cheese at this point because, somehow, ewes with lambs have the ability to withhold butterfat while being milked. They only give the good stuff to the lambs, not the cheesemakers. (As strange as that sounds, research at the University of Wisconsin backs it up.) “We have to wait until lambs are fully weened before milk is actually good for cheesemaking,” says Hoffmann.

Facilities on this edge of the farm look simple: a milking barn with a 12-stall stanchion for milking, another small shed with a couple of tight offices, and the cheese kitchen. The latter might look simple from the outside, but the procedures inside are anything but.

“Hygiene is critical,” says Michael Salzman, assistant director of operations. He oversees all of the food safety and is basically Hoffmann’s assistant in running the company. Trained in cheesemaking in Switzerland and other U.S. cheese companies, his knowledge of how cheese is made is extensive. The shelf behind his desk is packed with books. “There are books and books and books on cheesemaking,” he says, adding that there is always more to learn.

But cleanliness and hygiene are essential. After he walks in the cheesemaking area, protected by locked door, he washes his hands four times in the first 10 minutes. “It’s a habit. You get used to it.”

The process. Cheesemaking, he says, is essentially the same regardless of the milk. A simplified description of the process would be, the milk goes into a stainless steel vat and is heated to 145 degrees. After that, lactic acid starter cultures are added to reduce the pH of the milk. Then rennet — an enzyme found in the lining of calves’, sheep, and goats’ stomachs — is poured into the milk. After careful stirring and timing, the milk becomes a soft gel — essentially, a cheese curd. 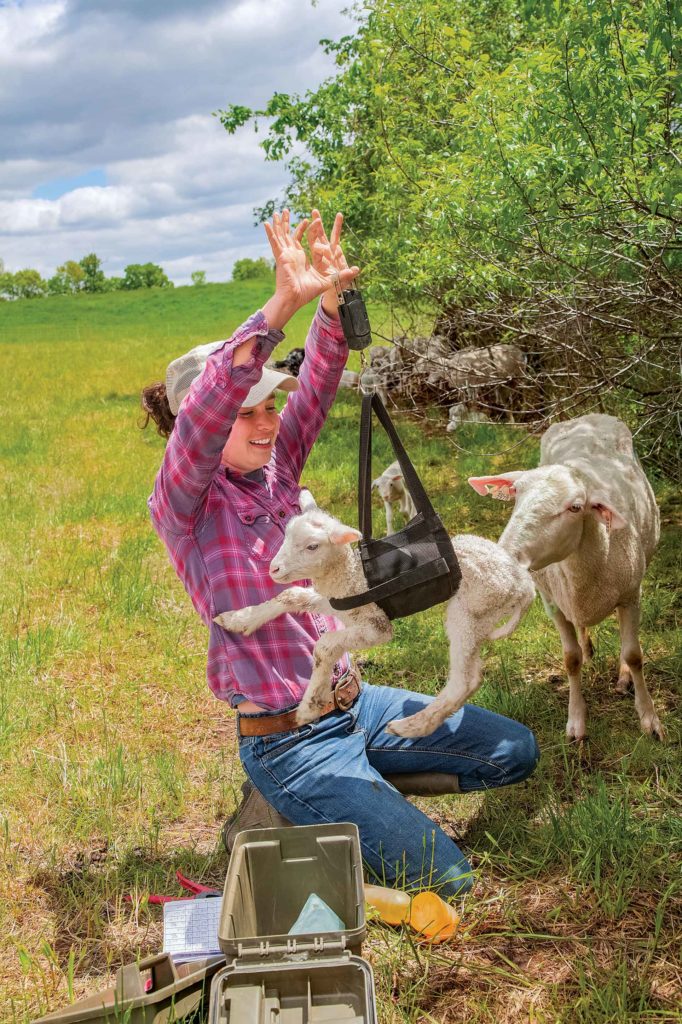 Eliza Hoffmann, 27, is manager of the farming end of the Green Dirt Farm operation. Here she weighs and makes records on newborn lambs.

Fun fact…we all have rennet in our stomachs, and it’s essential to making cheese. Remember when a baby spit up on you after drinking milk and you saw small white particles? Yep. Those are cheese curds — just don’t think about that the next time you eat cheese.

The large and soft cheese curd is cut and removed to molds to let the remaining moisture—a product called whey—drain. Then salt is added. “You have to add salt,” says Salzman. “If it doesn’t have salt it just tastes like something weird.”

Beyond the basic process, cheesemakers can adjust the workflow to make a wide range of variations. The possibilities are endless. Some cheese remains soft enough to spread, some is aged for a long time to create hard cheeses.

“There’s still bacteria as well as molds and yeasts that are alive in that cheese that are creating more and more intense flavor compounds. So without the bacteria, molds and yeast, we wouldn’t have cheese. It just wouldn’t exist.”

As the bacteria, molds, and yeast continue to work, the cheese develops flavors and aromas: fruits, vegetables, smoked ham, cooked mushrooms. Plus cheesemakers can add other flavors, such as rosemary, garlic, peppercorns, nettle. The possibilities are seemingly endless.

One of the farm’s more unusual cheeses is the dirt lover, a cheese covered in black ash. “The stuff that we rub on it is actually a vegetable ash. So it’s basically pure carbon,” says Saltzman. “The history goes back many, many centuries. The story goes that these were cheeses made in households, and women would put ash across the cheese to keep flies off of it. This became a style of cheese that was recognized and is now protected in France. What these farm people didn’t know is that the ash lowers the acidification on the surface of the cheese, which then creates an environment that is easier for the molds and yeasts to colonize. In turn, it’s beneficial to the cheese ripening.”

You eat the cheese and the ash. It’s delicious.

Green Dirt Farm customers can try the cheeses at its creamery in nearby Weston, where they can accompany that with wine, beer, and lunches. Or, they can come to one of the farms seated tastings on the farm. Hoffmann fell into that by accident and good fortune.

“But we realized this was a really strong desire. So we started thinking about how could we do that. And we were very fortunate at the time to have an employee on staff who had been hired as an intern to milk sheep and move fence and help us move the sheep on the pastures.” 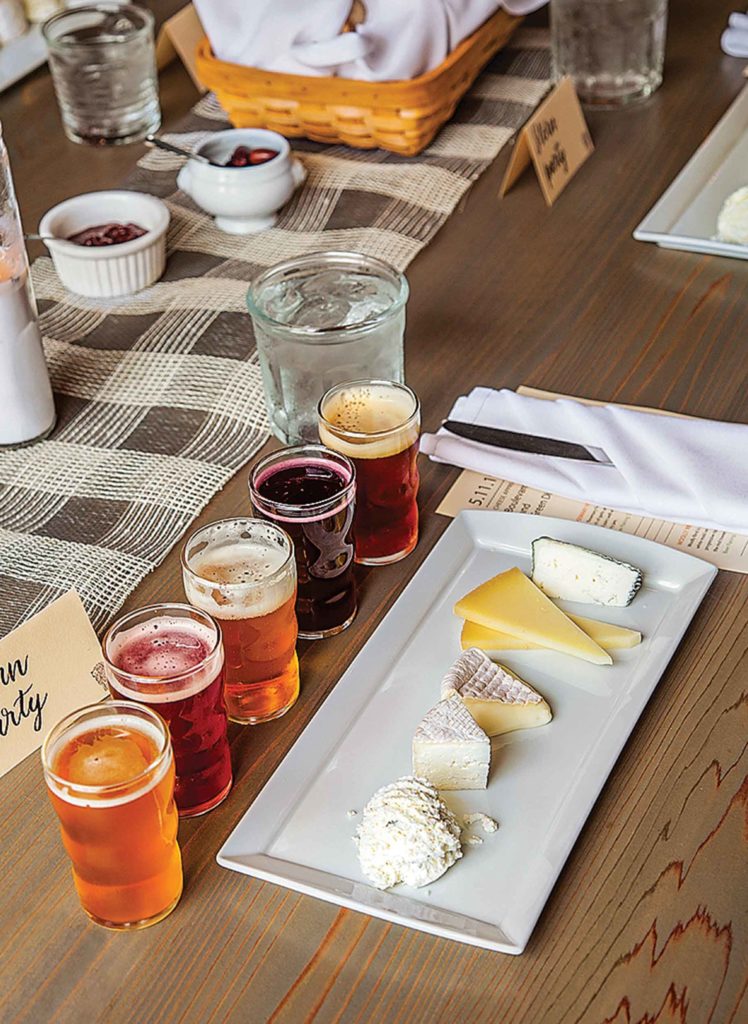 Five cheese are plated for tasters, each paired with a beer from a brewery in Kansas City.

He also happened to have vast fine restaurant experience and was simply burned out with that. He saw an old lambing barn, recognized it’s possibilities—despite the two feet of sheep bedding—cleaned it up, and reached out to his restaurant friends in Kansas City to come and see.

“Because of him, we started the dinner series and then we added on cheese tastings,” says Hoffmann. Plus the farm offers tours to anyone who wants. It’s just good for business. Hoffmann estimates she has about 2,000 visitors a year.

“I think that people are longing for a connection to the land and to the farm that they don’t
get in the city. They’re longing for that sense of peace and quiet,” says Hoffmann. “There’s nothing more that people love them to just stand and watch sheep graze. It’s a very relaxing and meditative kind of experience.

“And I think people long for that as a way to feel more connected to where their food comes from.”

Green Dirt Farm sold about 30,000 poundsof cheese last year, but Hoffmann’s goal is to reach 60,000 pounds. Her cheeses sell at retail nationwide for $30 a pound. That’s a premium price, but the product is premium. From the first year, Hoffmann’s cheeses began winning awards. “Since then we’ve won almost every single year. Last year we took home seven awards. We’re really proud of that.”

During her short time on the farm, intern Amelia Rogers-Jones, an experienced cheesemaker herself, is taking it all in and learning as much as she can. But watching over the sheep in the pasture has given her an unforgettable the experience.

“When we start making cheeses in the morning, I think about being out here with the sheep the night before, watching Eliza feed them, and it’s almost like I can see what I’m tasting,” she says. “It just makes me feel a lot more connected to the product I make.”