Amy and Darrell Klug bought a 250-year-old mill, a local landmark on eight acres beside Beaver Creek near Greensboro, N.C. But what they got was much more than that. They tapped into a deep vein of local history: a takeover by British General Cornwallis’ troops during the Revolutionary War; a milling slave set up in
business by a local farmer. It was a moonshine hotspot during Prohibition and home to a retired Scottish seaman who spent decades fixing things around the place. And, always—just as it is today—it was the local community hub.

Over the years, the millstones at the Old Mill of Guilford have spun almost continuously. Initially, the mill pond powered the stones directly. Later, a water wheel spun a turbine that drove electrified mills or a steam engine in the creek delivered the juice. Today, Klug and the miller, Annie Laura Perdue, use power lines to run a generator, though with repairs to the feeder pipe, someday the 24-foot water wheel may turn again.

The Old Mill is on its second location—it was moved in 1818 to its current spot—and its fourth wooden overshot wheel. But for generations of Guilford County residents back to the Colonial days, the mill has been the place to buy grits, meal, and flour, and listen in on local gossip. It still is. 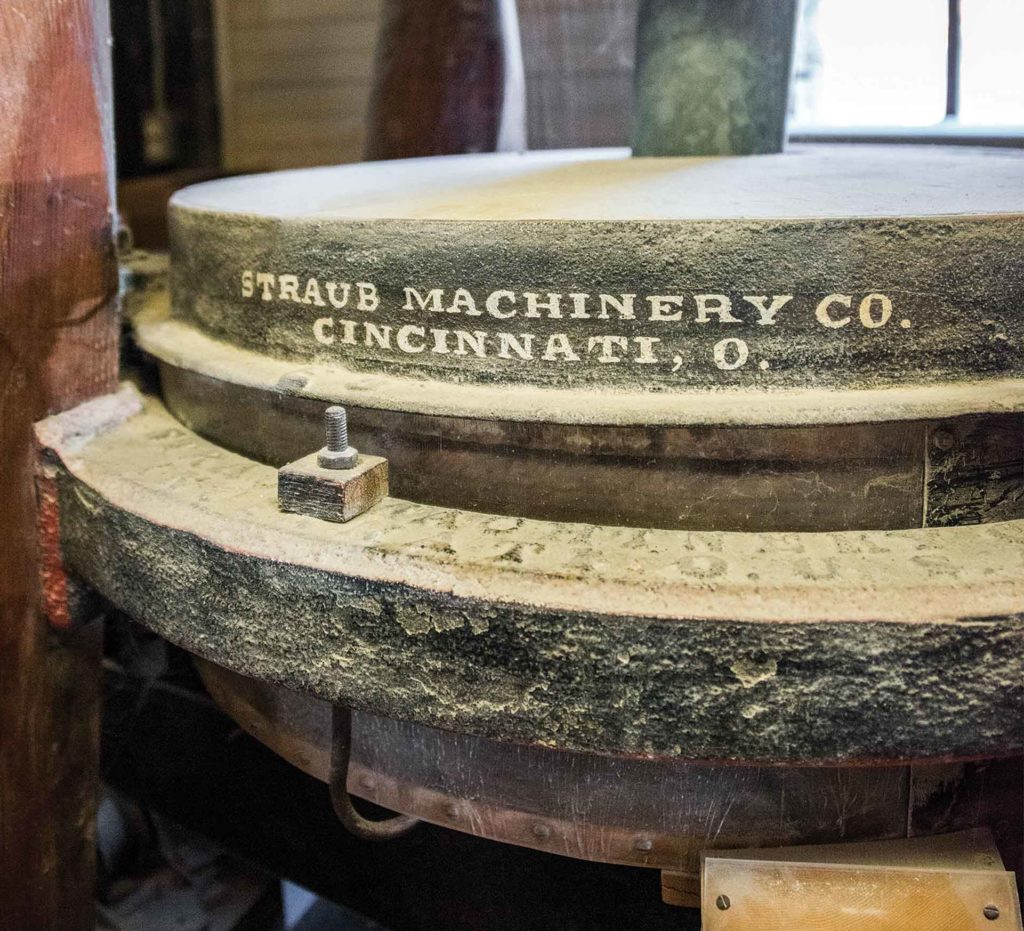 If the millstones don’t turn correctly, they could rub together and risk a potentially explosive spark.

Favorite place. “Farmers would hang out with other farmers, catching up on the news,” says Amy Klug. “When their grain was done, they’d go on their merry way. Some of my customers would say this was their favorite thing to do because they’d get off the farm, get to fish in the river, and play.”

Several of those customers recall that while they played with other farm kids in the creek back in the 1920s, elders were into a game of their own.

“During Prohibition, this mill had grain, sugar, and water,” Klug notes with a grin. “What do you make with those three ingredients? The code name was Ferdinand: was Ferdinand here? I have some customers who remember coming here and their grandfather saying, ‘you stay here; I’ll come back.’”

After Prohibition, the focus shifted back to grits and cornmeal and remained there during the 30 years that retired sailor Charlie Parnell owned the place. When he died in 2007, followed quickly by his wife Heidi, the mill came up for sale.

The timing was perfect for Amy Klug, a former marketing researcher who was looking for a business as her three children set off for school.

“I was a customer here,” she says. “I came over and took a look. It was a bit of a leap of faith. I wanted flexibility because my top priority is to be the mom. I work school hours and Saturdays.

“I didn’t know anything about mills, but I loved the product and thought the best approach would be to ease in,” Klug notes. “The only change I did right away was to buy a credit card machine, then a computer so we could run more efficiently.”

Klug also invested in a freezer. Fresh-milled grains without preservatives only have a six-to-eight-week shelf life at room temperature, but freezing the flours and mixes extends it to a year. 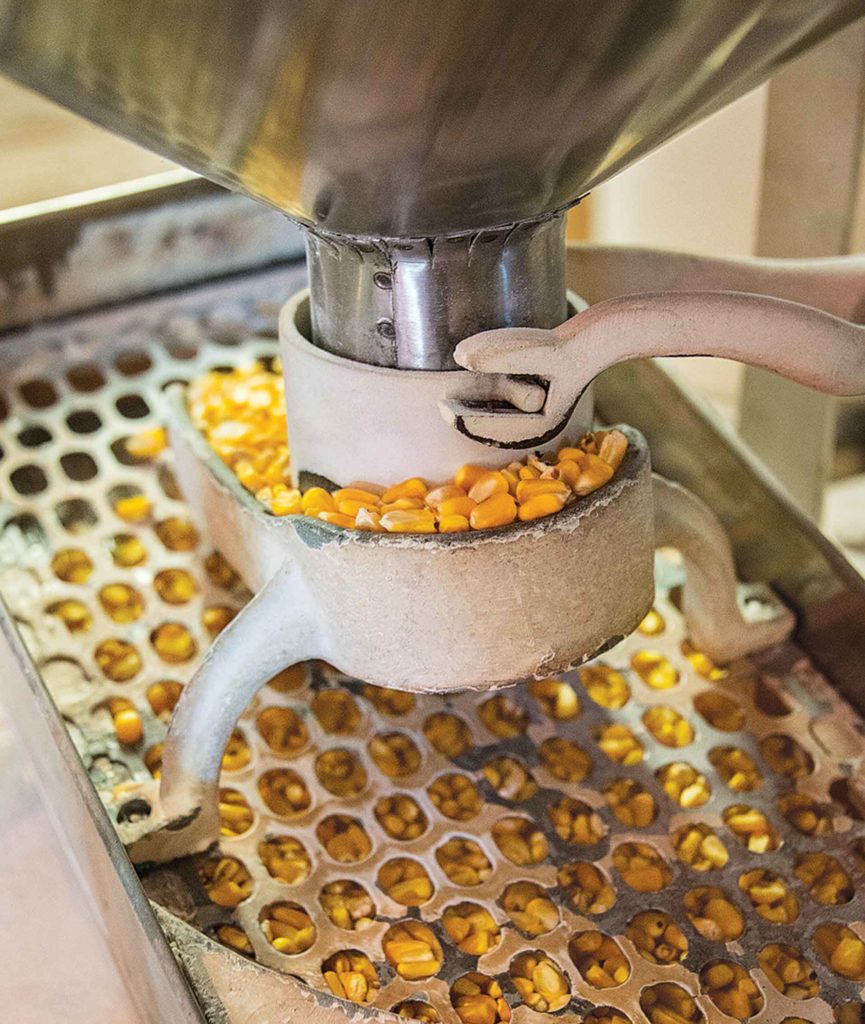 Corn is ground into meal, grits, and polenta; it’s all about the size of the particle.

Running a small business, courting journalists from PBS and RFD-TV, showing local visitors and tourists around, and shipping product across the country have all been pretty smooth, according to Klug. What can sometimes be daunting is realizing that she is the guardian of a local treasure.

“It’s a huge responsibility,” she says. “This mill is on the Town of Oak Ridge seal. It’s one of the oldest mills in the country. And it’s a for-profit business.”

Great people. Klug has help keeping the doors open and the millstones spinning: a group of dedicated volunteers. When the creek floods, volunteers come to clear debris. When things need fixing, somebody always steps in to make it work.

“We’ve got one volunteer now who was an Army Ranger for 30 years,” says Perdue. “He can fix anything. He comes out on Sundays. And Barbara has an engineer’s mind. Her daddy’s a farmer. She learned how to fix everything at the farm.”

Even with a cadre of volunteers just a phone call away, it’s most likely that Annie Laura Perdue is the first person to grab a wrench. After all, she learned the ins and outs of just about every wheel and machine in the place from Charlie Parnell.

“I would come out here and help Charlie and Heidi in the summer when the kids were out of school and heading for their summer jobs,” says Perdue, who worked as a teacher’s aide. “Sometimes, when it was a stressful day at school, I would come out here to de-stress. As Charlie got older, I got to be his hands and legs. When he couldn’t get down under the machine, I would get under the machine, and he’d tell me what bolt to turn.”

After years of apprenticeship, Perdue stepped up for the ultimate test. Parnell was in the hospital, the flour bins were empty, and orders were flowing in. Parnell gave her a simple instruction—”don’t blow up my mill”—and she started grinding. 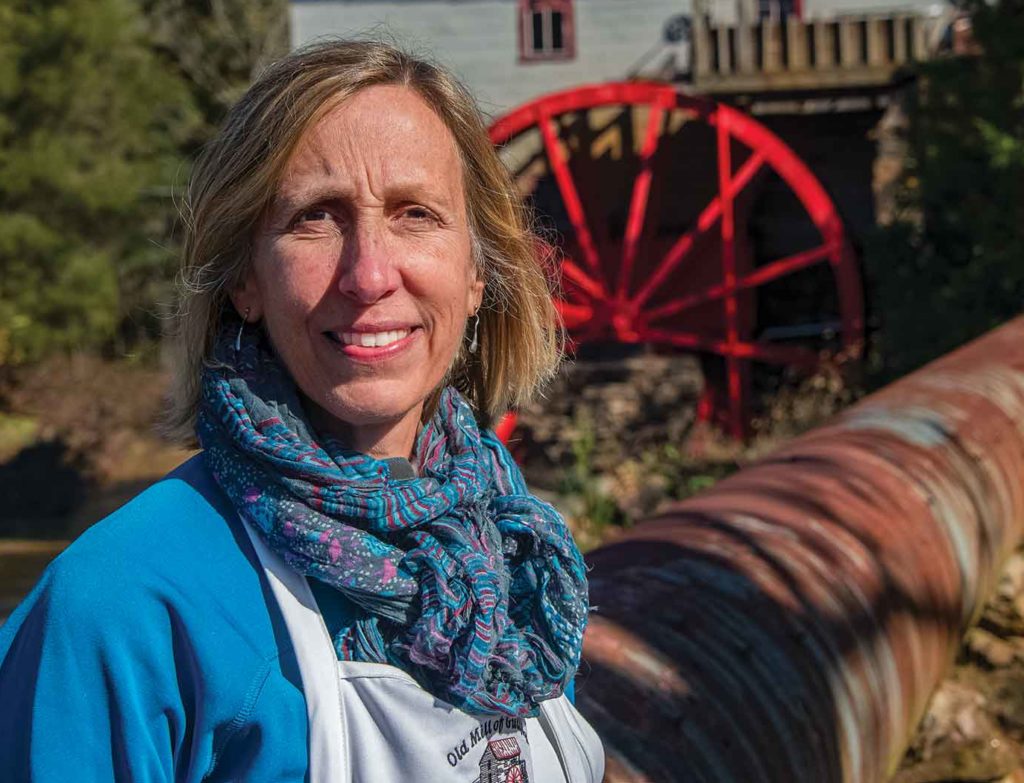 Amy Klug and her husband Darrell purchased The Old Mill of Guilford in 2008. She learned the milling business from the ground up.

“I had volunteers check my flour and some of Charlie’s,” she says. “I’d ask, ‘which one is mine?’ When they said mine was Charlie’s, I knew I was OK.”

As Parnell got older, Perdue became the miller. She learned to feel the grind, to rely on all her senses to make sure the stones were turning correctly and not rubbing together, risking a spark that could combust the dry flour in a massive explosion. She practiced dressing the millstones, restoring the diagonal grooves that cut the grain rather than smear it. Perdue carries on the mill’s legacy.

“The best way to describe Annie Laura is she’s the heart of the operation,” says Klug. “She knows everybody. She’s been involved with the mill for 50 years as a customer, a volunteer, an employee, the miller. She’s really the heart of it.”

But Perdue is quick to note that the people she calls “the mill family” have helped her heart, too.

“When my husband died suddenly at age 60, if it weren’t for this place, I’d have been a basket case,” she says. “All the people put their arms around me and kept me going. It’s a special place, and the people make it even more special.” 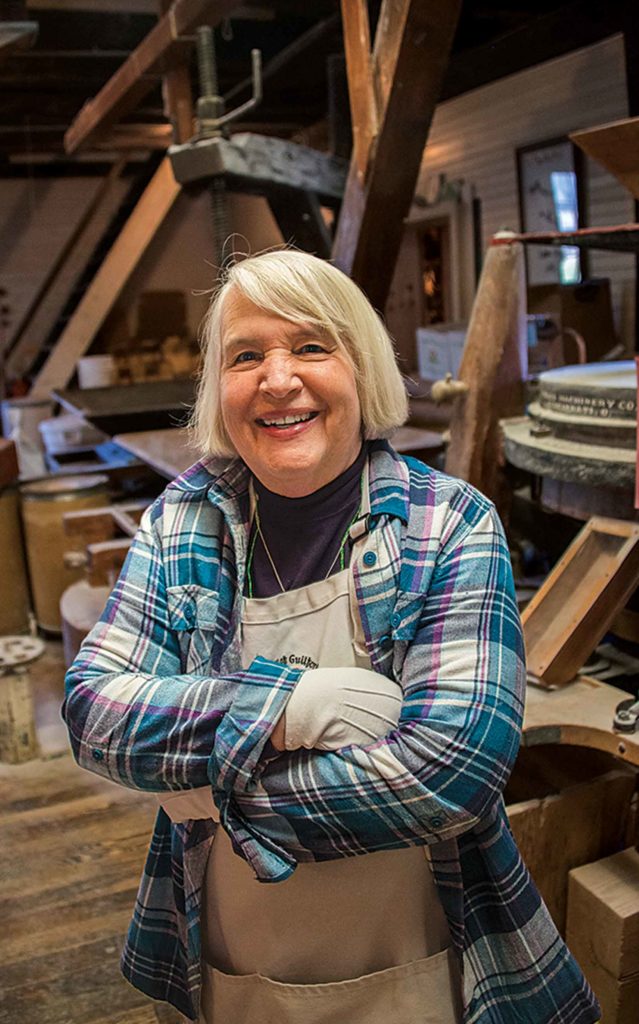 Annie Laura Perdue has been connected to the mill for 50 years—as a customer, volunteer, and miller.

Certain traditions. While Barbara Stevens and Perdue’s grandson, Kenny Goodman, fill and tie bags of flour, Klug and Perdue show visitors around the mill. Three large 19th-century mills, their stones set horizontally in cast-iron housings, dominate the room. As she describes the milling process to a couple and their teenage daughter, Perdue runs bright yellow corn through a smaller Meadows mill whose stones are aligned side by side.

She peers into the hopper, bends down to watch corn feeding through a steel screen, then walks over to the vibrating sifter to make sure the ground grain is being shunted to the appropriate buckets—polenta, grits, and corn meal, biggest to smallest.

The Old Mill of Guilford grinds about 750 pounds of corn and wheat per week, steadily keeping up with orders without building up inventory.

“We don’t add preservatives to our products, so they can’t be warehoused,” Klug explains. “We only make what we are going to sell.”

Even so, the mill slows to a halt around noon.

“Like any other business, we have certain traditions,” Klug says. “One tradition is that we feed everyone lunch. We all eat together. I ring the bell on the porch, close the door, and put a sign out that says, ‘back in 15 minutes.’ That’s something I adopted.”

Soup and fresh bread are passed. Memories are shared. It’s a special family dinner—the mill family. After lunch, everybody returns to the mill, but the group lingers outside on the porch for a few extra minutes to enjoy a beautiful fall day.

This is the heart of what Amy and Darrell Klug really got when they bought the Old Mill of Guilford: a legacy of relationships and memories spreading across the porch and across the generations.

All that and the picturesque mill by the creek. “I don’t always take the time to look at how beautiful this is, how lucky I am to work here,” Klug says as the water wheel glows in the sun. “It’s peaceful.”