In the first days of the National Cowboy Poetry Gathering in Elko, Nevada, graphic novelist Marek Bennett peers through wire-rimmed spectacles at the adults who’ve clustered in the convention center to learn cowboy comics. The group includes two retired ranchers, a couple of practicing ranch owners, and a 20-something buckaroo. There are also city folk — an investment banker, an insurance broker, a communications specialist, and a member of the media. These are the usual suspects who land in Elko every winter for the week-long celebration of western music, arts, and dance.

The person who is less than usual is Bennett.

A New England native, the wiry cartoonist wears khakis, Converse tennis shoes, and a wool driving cap turned backward — duds that are far from the Gathering’s more common attire of boots, jeans, and cowboy hats. Having a curly beard that sweeps toward his clavicle, he looks like a youngish Abe Lincoln clad in hipster’s clothing.

Bennett and his students represent simultaneous moments in American history that rocked the country into a new age: Folks attending the Gathering admire the Wild West as it was during the decades when 19th-century dreamers, wranglers, and shysters spilled out of Midwestern farmlands to settle its unforgiving ranges; Bennett values stories of heartbreak, valor, and change that emerged during the 1860s Civil War.

Cartooning history. “A lot of graphic novelists are doing really adventurous historical graphic novels right now,” Bennett tells the Elko students at the start of class. His favorites include the 1980s Pulitzer Prize winning “Maus,” in which cartoonist Art Spiegelman interviews his father about the Holocaust, and characters are drawn as mice, cats, and pigs. 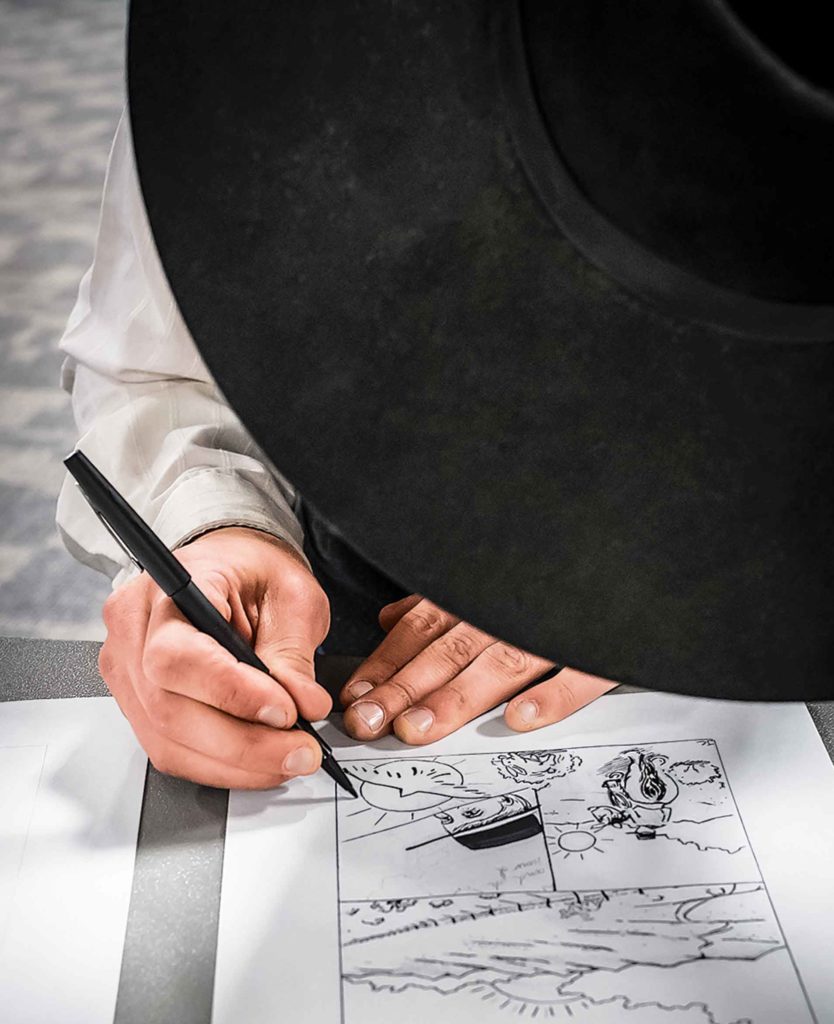 Eight years ago, Bennett found his own fantastic piece of the past to retell. In Henniker’s historical archives, he discovered a forgotten 30-page Civil War memoir written by a then-local schoolteacher, Freeman Colby, who described the months he and other members of the 39th Regiment spent building and tearing down camps, repeating endless military drills, choking down “hardtack” flour-and-water biscuits, recovering in sick rooms, and occasionally fighting their countrymen. Bennett knew that if Colby’s stories were brought to life in a graphic novel, they could relate the Civil War in a fresh way.

“I was really curious about Colby’s story, and I realized drawing it out panel by panel would help me to understand it better,” Bennett says. “I also felt an urge to help Colby tell his story to a new generation of readers…possibly his first ever
generation of readers. I think that diary’s been sitting in a box on a shelf for many, many years.”

“Colby’s story takes place at a cataclysmic meeting point of two worlds,” Bennett says, “an old agrarian world that had existed for centuries, and a new industrial world still forming. It was a fascinating fault line between the Middle Ages and the Modern World. It was that most distant point in history where I could recognize my own world, my own modern perspectives in some of the stories that come down to us.”

In 2016, some 340 pages and thousands of cartoon panels later, Bennett published “The Civil War Diary of Freeman Colby.” Its drawn stories are fascinating, funny, and tragic. Enough excitement bubbled around that book that this winter he launched a successful Kickstarter campaign for Volume 2. The book will be available in May.

Cowboys and comics. In the convention center, Bennett warms up his budding artists with a camp humor rhyme called “Boomer Johnson,” written by Henry Herbert Knibbs about a gunslinger who “quits a punchin’ cattle and takes to punchin’ dough.”

“….He built his doughnuts solid, and it sure would curl your hair

To see him plug a doughnut as he tossed it in the air.

He bored the holes plum center every time his pistol spoke,

When Bennett explains his drawing process, it’s clear his cartoons don’t pop without a hitch onto the page. He first drew Boomer as a human figure in a broad hat and a dark mustache. Then he stepped back. “I got to looking at my characters and thought, ‘Wait a minute; I have made an assumption about cowboys,’” he says. “I’d drawn the types of cowboys I’d seen in movies. Who knows? Statistically, in reality, maybe they were not all white or even all male.’” He redrew the gunslingin’ pastry chef as a figure less threatening, more abstract — a mustachioed swine wearing a vest and cowboy hat. The picture sends the students into giggles, exactly the response that both Bennett — and Knibbs — had in mind.

Is it Cowboy? The Cowboy Poetry Gathering draws performers from all over the world. For years, one question has ricocheted from room to room: “What is cowboy poetry?” Must it have a full story, complete with beginning, middle, and end; contain line breaks and rhythmic beats; conjure scenes of cattle thieves, valiant heroes, evil bankers, lurking coyotes, and lassoing vaqueros? Or should it be free from all that? 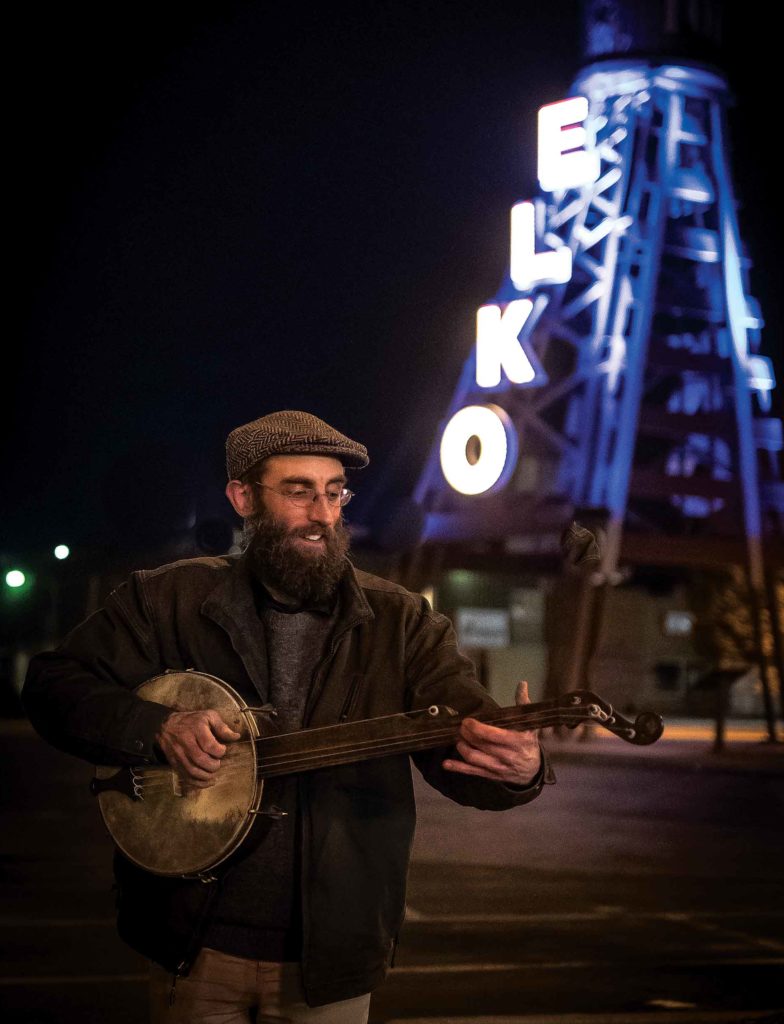 Despite the winter chill, Elko’s streets come alive with music, poetry, and events. Historic downtown streets host a blend of coffee shops and Western stores, next to Basque restaurants, casinos, and a few classic saloons.

“In curating this year’s Gathering,” says Kristin Windbigler, director of the Western Folklife Center, “we wanted to make room for all sorts of stories that show the incredible variety of experiences, opinions, and beliefs among people who make their livings close to the land, and how much those people care about their communities and roles as stewards of the places where we live. I love old western movies as much as anybody, but that is often the limit of what the rest of the world knows about us.”

Comic strip. As Bennett finishes his gunslinger segment, his students put pencil to paper, turning their own stories into dots, lines, and shapes. Bennett chats while they sketch away. “Even though we’re drawing different stories in different styles, there’s something at the core that we’re all doing — some basic visual human communication that connects and informs and empowers all of us,” he says. “You can see it in ancient cave paintings, in images all through human history, and you feel it whenever you just sit down with friends or family and draw, without worrying about ‘Is it good?’ or ‘Is it art?’ None of that judgmental evaluation matters; it’s the moment of communication and recognition that makes all the work worth it.”

The next one. After the National Cowboy Poetry Gathering’s western lore, is Bennett tempted to explore in his next graphic novel how a buckaroo swashbuckled his way from a hopeless past to a new community? Perhaps tucked in a drawer deep in the Elko historical society archives, a diary of such a tale is craving to be found. Or maybe the long-lost narrative isn’t that of a cowboy, but of a leather worker opening J.M. Capriola Company, Elko’s famous shop of saddles, bits, and spurs; or of a waitress-turned-boarding house owner who slings hot potatoes, soup, and lamb onto tables for famished sheepherders; or a coming of age story about a ranch kid living in the middle of Nevada’s wide-open basin and range.

As Bennett implies — such stories are for an Elko cartoonist to discover.